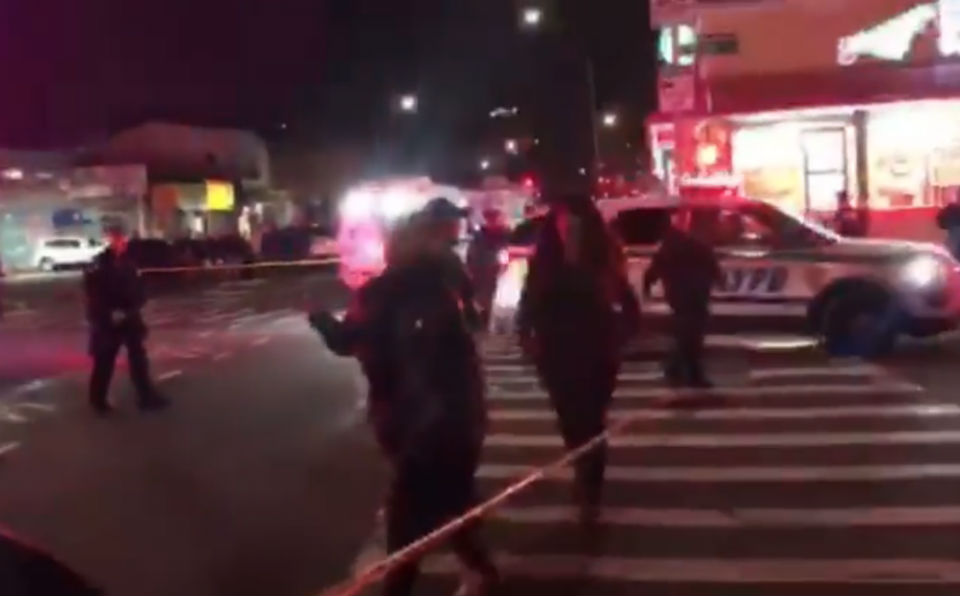 NY COP IN COMA after rushing in to aid nail salon workers, was hit in face by chair [VIDEO]

A New York City police officer is in a medically induced coma after he was attacked by a mentally ill man during a bizarre scuffle Friday night, NBC News reports.

The officer, who has severe head injuries, has been with the NYPD for 21 years. His name has not been released.

According to authorities, the incident started around 5:40 p.m. Friday. That’s when a panhandler entered a Brooklyn nail salon and started to urinate.

Around the same time, the officer and his patrol partner were passing the shop in their vehicle and were flagged down by an employee.

As officers were arresting the panhandler, 33-year-old Kwesi Ashun barged into the salon and confronted the cops.

Ashun, a street vendor with a history of mental illness, allegedly struck the NYPD veteran in the face using a chair, NYPD Chief of Patrol Rodney Harrison told the New York Post, which obtained video of family members at the scene following the violent incident.

Ashun’s sister told the Post that he suffers from schizophrenia and bi-polar disorder.

The other officer fired a Taser at Ashun, but it did not impede the attack, according to investigators.

That’s when the injured cop fired his gun and struck Ashun, who was declared dead at the scene.

Meanwhile, the injured officer was rushed to the hospital.

In a 2004 incident, Ashun was accused of slashing an officer from ear to neck and then walking away. He was carrying two knives when he was arrested, which required the use of pepper spray.

Family and friends of Ashun were at the salon Friday after the shooting and criticized police, according to the  New York Post.

“He struggled with mental illness and we tried desperately to get help for him to no avail,” Ashun’s sister, Ama Bartley, told the newspaper.

She said her brother had met with a city crisis team on Oct. 14 but that workers determined he did not pose a threat to himself or others.

“Eleven days later, this is what happens,” Bartley told the newspaper. “We tried, we really tried to get him help. He was a beautiful soul. He was just battling some heavy things.”

In a news conference Friday night, Pat Lynch, head of the Police Benevolent Association, reportedly expressed outrage over the shooting.

“This police officer spent his career in our busiest precincts serving the community. And he was set upon. For no reason!” Lynch said.

New York City police have shot six people since the end of September, including five that were fatal, according to NBC News.

State Assemblywoman Latrice Walker said she was walking near the salon just as the melee began and was even approached by Ashun who had asked her if she wanted to buy a shirt.

“Gunshots rang out,” Walker told the Post. “It was five o’clock – kids were leaving after school – it was mayhem. Children were running, families were afraid – my daughter was screaming.”