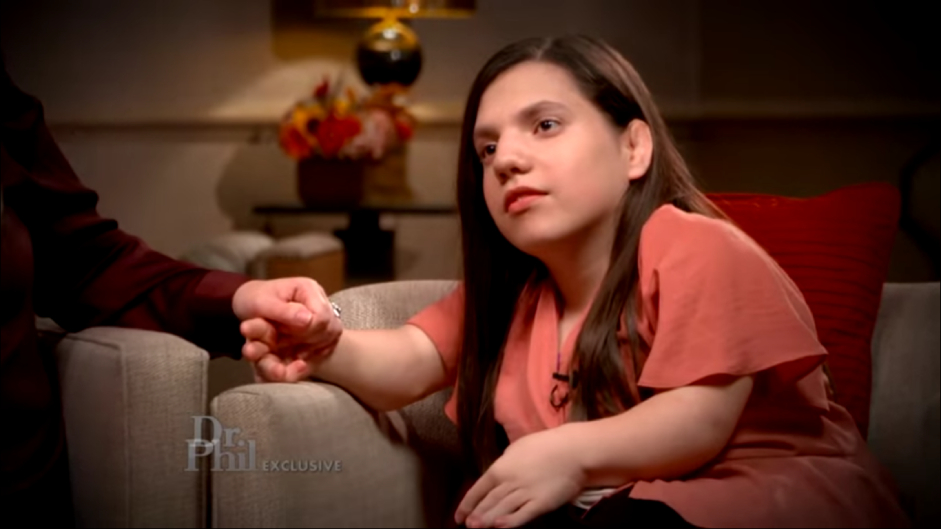 A Ukrainian adoptee told television psychiatrist Phil McGraw that accusations from her adoptive parents that she is a violent, deceptive adult instead of a child with dwarfism just aren’t true.

“I was 6-years-old when I came to the United States,” Natalia Barnett said on Thursday’s episode of “Dr Phil,” according to WLFI in West Lafayette, Indiana.

Natalia — who is either 16 or 33 depending on who is asked — tearfully denied allegations that she was masquerading as a child during the television appearance.

Her adoptive parents, Kristine and Michael Barnett, 45 and 43, were charged in September with neglect of a dependent for allegedly abandoning her in a rented Lafayette apartment and fleeing to Canada in July 2013. Natalia Barnett reportedly has a form of dwarfism called spondyloepiphyseal dysplasia congenita (SED), and doctors reportedly estimated her to be eight years old in 2010.

The Daily Mail reportedly located Natalia’s birth mother in Mykolaiv, Ukraine, who told them that Natalia was born on September 4, 2003, and that doctors had urged her to give up the little girl because of her dwarfism.

Gava, who divorced Natalia’s father before the baby was born, has four other children. She told the Daily Mail she would love to meet her daughter and ask for her forgiveness.

The Daily Mail also reported that it saw documentation of Natalia Gava’s admission to an orphanage in October 2003, with her birth date noted as September 4, 2003. Other documentation showed that the girl came to the United States in 2008 and was initially adopted by New Hampshire couple Dyan and Gary Ciccone, who have declined to speak about their time with Natalia. Two years later, she was at an adoption center in Florida, where she was adopted by the Barnetts.

The Barnetts, however, accused Natalia of lying about her age and attempting to harm the family, as previously reported by CrimeOnline. They had the girl’s birthdate legally changed to 1989 before renting an apartment for her in Lafayette and moving to Canada. The Barnetts have since divorced.

“I certainly don’t think this individual is 30 years old,” he said. “So I think the court has done a real miscarriage of justice here in reading her the way they have. I don’t think there’s really medical support for that.”

McGraw had harsh words for the Barnetts as well, saying that when you adopt a child “that child is yours just the same as if you birthed that child at the hospital.”

“I didn’t think that you could quit when you had children, just drop them off somewhere,” he said.

Natalia reportedly lived alone in the Lafayette apartment for a year before she met another Indiana couple, Antwon and Cynthia Mans, with whom she’s been living since 2014. The Manses, who appeared on the show with Natalia, told McGraw that they’ve seen none of the behavior the Barnetts claimed to have seen and denied their charge that Natalia was menstruating before they abandoned her.

“She’s been with us for almost seven years,” said Cynthia Mans. “To this day, she has not had a menstrual.”

Last month, an Indiana judge issued a gag order which bars Michael and Kristine Barnett from making public statements regarding their adopted daughter’s medical history, mental health, educational records, and her character or credibility. The existing order reportedly does not prohibit them from making general comments regarding the pending case or their innocence.