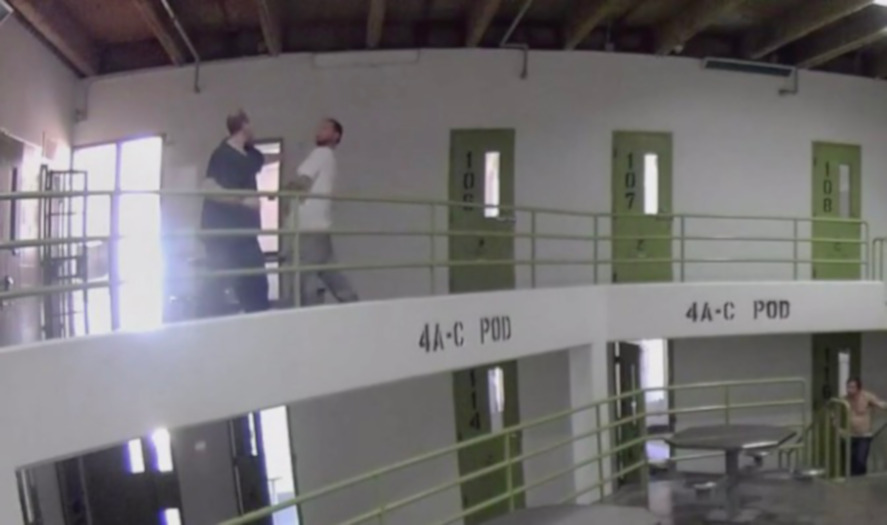 Video released this week shows Jake Patterson, the man accused of kidnapping teenager Jayme Closs and killing her parents, fighting with an inmate who asked him about the case, WBAY in Green Bay, Wisconsin, reported.

Patterson is serving a life sentence for the murders of James and Denise Closs in Barron, Wisconsin, and kidnapping their daughter last year. He was transferred from prison in Wisconsin to New Mexico in July for his own safety.

The video shows Patterson and one inmate talking briefly on the second level before it gets heated and punches are thrown. Patterson is the inmate in darker clothing. A guard fires a bean bag from the far right to break up the fight, and both men get on the floor.

The Green Bay Gazette obtained court documents from the New Mexico Department of Corrections, which detailed an altercation between Patterson and two other inmates.

According to court documents, at least two New Mexico inmates didn’t want Patterson around because of his charges involving a young girl. When Patterson walked into the gym area of the prison, the inmates approached him and told him to leave. One of the inmates reportedly “questioned his case involving a 14-year-old girl.”

Patterson apparently tried to convince the inmates to let him stay, but one of them warned Patterson not to “test” him.

The inmate then took an “aggressive approach” toward Patterson. The incident was captured on security footage, according to court records. Patterson punched the inmate and the pair brawled until an officer broke the fight up. Officials placed Patterson in “restricted housing,” according to the outlet.

As CrimeOnline previously reported, after Patterson shot Jayme’s father, he put a gun to her mother’s head and shot her while the teen girl watched in horror. He then took her to his remote home in Ogden, where he held her captive for 88 days.

Jayme eventually escaped when Patterson left for the day. After she flagged down a woman walking her dog, they contacted the police, who arrested Patterson the same day.

Jayme is now living with relatives, who said she’s getting stronger each day.