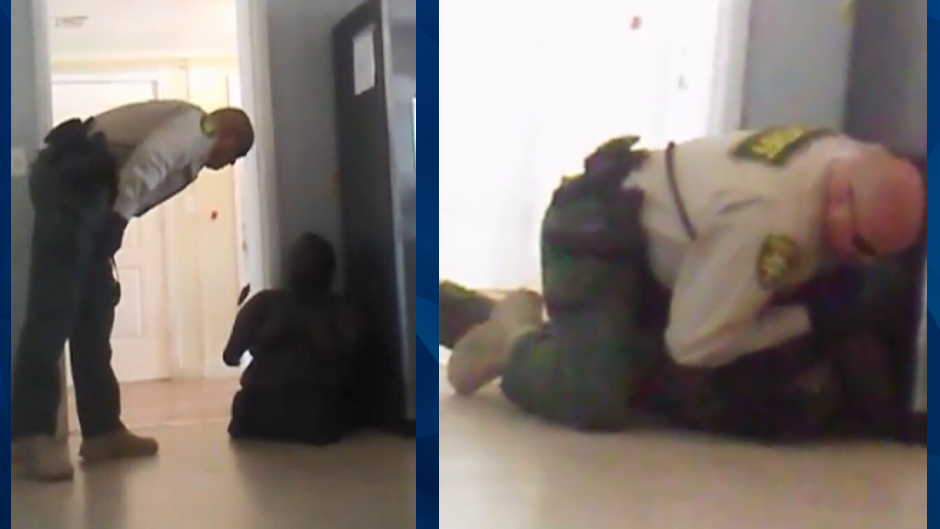 VIDEO: Deputy on leave after wrestling teen quadruple amputee to ground during arrest

An Arizona police officer was on administrative leave on Friday, a day after a cellphone video was released which reportedly showed him wrestle a 15-year-old quadruple amputee to the ground during an arrest last month.

According to The Arizona Daily Star, Pima County deputy Manuel Van Santen is on leave amid an internal investigation into his arrests of two teen boys at a Tuscon-area group home. Pima County Sheriff Mark Napier told the news outlet that it is too soon to reveal whether the 11-year veteran of the sheriff’s department will face discipline — or criminal charges — for his conduct on September 26.

KOLD obtained the footage, which reportedly shows Van Santen arrest Immanuel Oloy at a group home for knocking over a garbage can and verbally threatening an employee. Oloy was reportedly placed at the group home after his family abandoned him.

Oloy’s lawyer said on the day in question, the teen was upset because he wanted to go back to school, according to The New York Times.

The Phoenix New Times reported that C.J., a 16-year-old boy in the group home, filmed the eight-minute cellphone video. In it, Van Santen is seen holding the shirtless teen in a headlock in the kitchen. The teen can be heard yelling for the officer to “get the f**k off of me.”

After getting up, Van Santen then yells and curses in Oloy’s face before asking him what his problem is. After insisting there is no problem, Oloy asks the deputy why he is yelling in his face.

“I will raise my voice to you whenever the f**k I want, you understand?” Van Santen snaps.

The officer’s boisterous reply elicits a response from C.J., who reminds him that Oloy was only answering his question. He then demands C.J. to “shut the h**l up” and leave the room before he gets arrested too.

C.J. is heard telling Van Santen that he is eating his cereal and is not allowed in his room.

“You have nothing to do with it, you understand? Am I your b***h?” the deputy asks C.J. while aggressively approaching him.

Another teen at the group home reportedly begins filming moments before Van Santen slams C.J. into a wall and also arrests him.

In a statement to The Daily Star, chief criminal deputy Jonathan Mosher confirmed that all criminal charges against Oloy and C.J. have been dropped in this case. The Arizona Department of Child Safety said they are also investigating the September 26 incident.