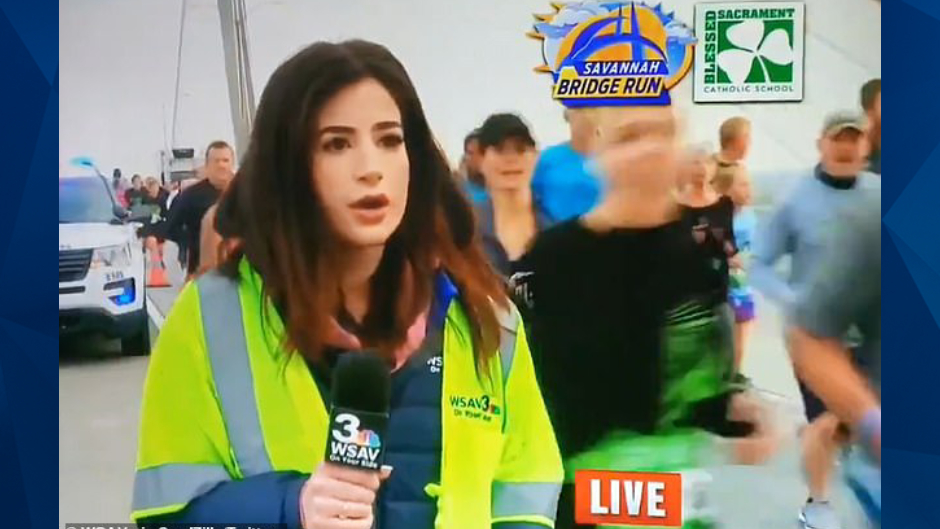 A youth pastor who reportedly slapped a Georgia television reporter’s backside while she was live on the air is speaking out as the video garners millions of views.

Jogger Tommy Callaway, 43, was reportedly filmed assaulting WSAV-TV’s Alex Bozarjian as she covered the Enmarket Savannah Bridge Run on Saturday. As the video clip gained national attention, Savannah Sports Council, who organized the run, announced that Callaway is banned from all their future events.

In addition to speaking with the news station, Callaway told Inside Edition that he was “caught up in the moment” when he slapped Bozarjian’s backside.

“I was getting ready to bring my hands up and wave to the camera to the audience, there was a misjudge in character and decision-making. I touched her back; I did not know exactly where I touched her,” the married father-of-two and Boy Scout leader explained.

Bozarjian told “CBS This Morning” that she is not sure she accepts his apology.

“He took my power, and I’m trying to take that back. I think what it really comes down to is that he helped himself to a part of my body,” she said on Tuesday.

CBS reported that Bozarjian filed a police report on Monday. In a statement issued to the news station, Callaway’s lawyer said his client did not act with any “criminal intentions.”

Referring to Callaway’s intent, Bozarijan said, “I’m not going to really debate that because he hurt me.”