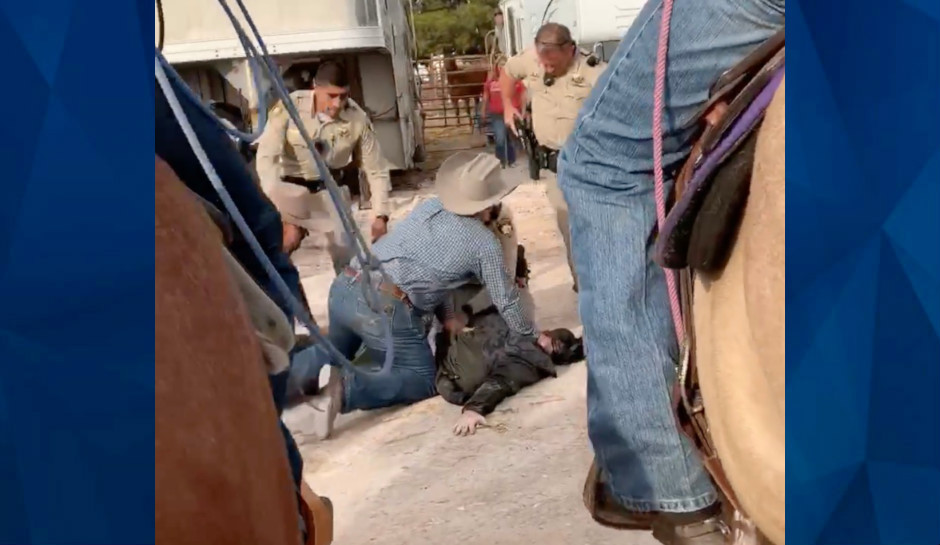 Police arrested three carjacking suspects who crashed a stolen vehicle into a horse trailer near The Horseman’s Park in east Las Vegas this week, one of whom thought he just might get away — until a posse of cowboys on horseback surrounded him, the Las Vegas Review-Journal reported.

The failed criminal hopped a fence right into a team roping competition, where cowboys were waiting to rope cattle in a timed event. While none of them got the opportunity to rope the bad guy, at least one was ready if needed.

“I was hesitant to rope him, but that was my goal if he kept running. … I would have made sure I stuck it on him,” Cayden Cox said.

Instead, Cox pulled out his phone and captured the scene as his fellow cowboys surrounded the suspect and the actual uniformed cops made the bust.

Cox told Fox 6 Now he saw the helicopter overhead and then patrol cars moving in fast.

“I’m like, ‘Oh shoot, we need to go catch the son of a buck,’ so I come running down through there, and I almost knocked over this older gentleman, and I felt bad, but I got to them, and right when I got to him, they all followed me,” said Cox, indicating the other cowboys. “We’re like, 60 guys behind us.”

“By the time I kind of had my rope up and [the suspect] had his hands up, right when I was thinking about roping him,” said Cox, a professional cowboy from California.

Cox said a couple of the cowpokes pinned the suspect down until the professional cops arrived.