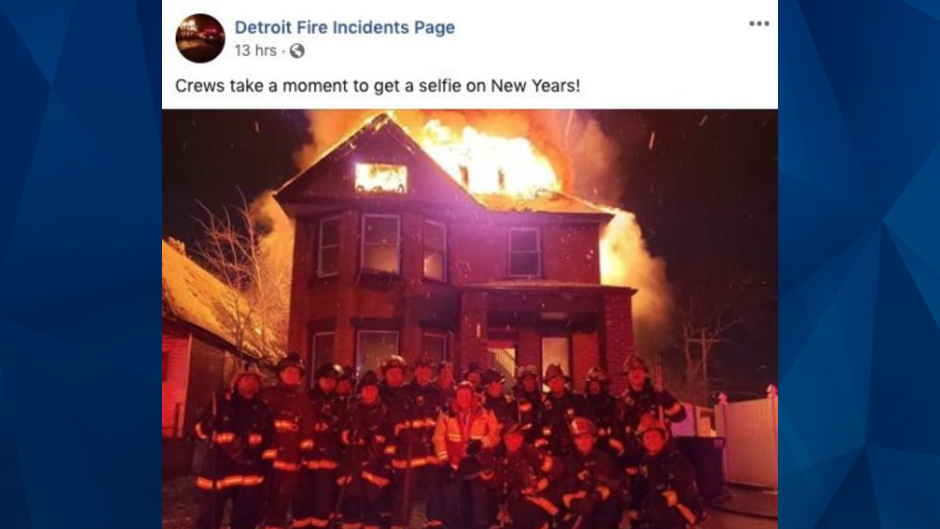 A fire department in Michigan is under investigation after firefighters reportedly posed for a picture in front of a burning home on New Year’s Day.

Deonte Higginbotham, 21, told the New York Post that he was in the process of renovating the two-story brick home which has been in his family for 50 years. He said he is “furious” over the now-viral photo which showed more than a dozen smiling Detroit firefighters gathered in front of his home as it burned down.

“They just let it burn to the ground. … Eighteen men and none of them did anything,” Higginbotham said. “All of them need to be fired.”

Higginbotham claimed he still lived at the residence with his 70-year-old mother who suffers from Alzheimer’s disease. He said his mother was temporarily living with relatives until the house was remodeled to accommodate her illness.

“She doesn’t know about the fire,” he told the Post. “I don’t even want to tell her.”

Detroit Fire reportedly confirmed that the home and the one next to it were vacant. Sources told WXYZ-TV that firefighters could not enter the burning home and fight the blaze and decided to combat it defensively from outside.

“It was a fire in a vacant building. … The fire was pretty involved, we were not going to go into the building. What we would do is keep the fire from spreading,” he commented.

However, Detroit Fire Commissioner Eric Jones went on to say that their actions were inappropriate if Fornell’s account is true.

“We will investigate this matter and follow the facts where they lead us,” Jones told WXYZ-TV in a statement. “If this photo is verified, discipline will be in order.”