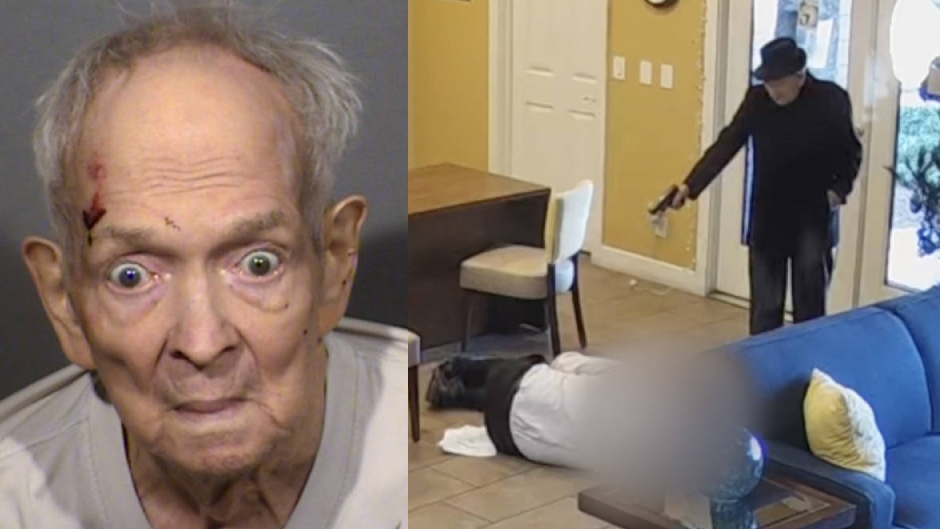 An elderly man in Nevada allegedly shot a maintenance worker at his apartment’s management office on Thursday during a dispute over water damage and flooding in his unit.

Las Vegas police released footage from surveillance and body cameras apparently showing Robert Thomas, 93, opening fire on the employee inside the Vista Del Valle apartments’ leasing office. The Las Vegas Review-Journal reported that a woman sitting at a desk called 911 after Thomas shot through a wall and hit a computer.

Moments earlier, Thomas was seen entering the office and brandishing a 9mm handgun. As the woman was on the phone with 911, Thomas was allegedly filmed shooting the maintenance man in his right leg.

***WARNING: The video below depicts a shooting and could be disturbing to some viewers. Please use discretion.***

As officers responded to the scene, Thomas can be seen standing over the victim and shooting him in his left leg.

Police ordered Thomas to drop the gun before one of the officers fired through the leasing office’s glass door. The bullet reportedly hit a lapel on Thomas’ jacket but left him unharmed. Moments later, officers grabbed Thomas through the doorway and took him into custody.

The maintenance man and Thomas, who suffered a laceration on his head during his arrest, were hospitalized for their injuries. Both men were treated and released on Friday, according to the Review-Journal.

Thomas was charged with suspicion of attempted murder, kidnapping, discharge of a firearm indoors, burglary, and carrying a concealed weapon. KNTV reported that Thomas was in a wheelchair during Tuesday’s court hearing and required headphones to hear the judge. He is due back in court on January 22.

“Do you understand the charges?” the judge asked Thomas.

To which Thomas responded, “Who me?… Oh yes. Yes, your honor.”