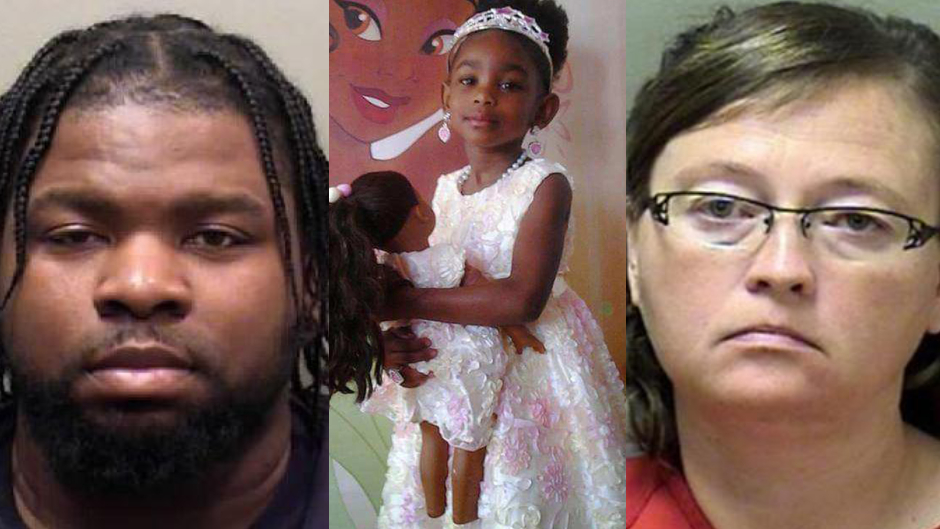 Dad stands by as girlfriend records herself abusing daughter. She later kicks the child to death, gets murder sentence VACATED!: Police

An Illinois man was recently arrested for allegedly failing to protect his 8-year-old daughter as his girlfriend repeatedly abused her — leading to her death last January.

The Pantagraph reported that Richard Rountree, 31, was charged with child endangerment in connection with the death of his daughter, Rica Rountree. Court documents charged that the father not only failed to stop the abuse but exposed his daughter to abuse at the hands of his girlfriend, Cynthia Baker.

Rica Rountree died from peritonitis due to intestinal perforation from blunt force trauma. Authorities alleged that Baker kicked the 8-year-old so hard that it killed her. According to WICS, an autopsy revealed that Rountree had more than 60 scars on her body, suggesting repeated child abuse.

Baker used her cellphone to film herself abusing the girl. Richard Rountree was also seen in those videos, which were shown in court. Text messages between the pair also discussed torturing the girl, the news station reported.

According to WGLT, a September 2018 video showed Richard Rountree and Baker’s two daughters walk past Rica Roundtree as she is forced to hold cans. Baker is seen kneeing the girl in the back twice, leading her head to slam into a wall. At one point, Baker’s teen daughter asks the abused girl, “Is it hard to keep your arms up?”

Another video showed the naked child shivering with her arms outstretched to hold cans. Baker recorded herself taunting the child and commanding her to raise her arms higher. The child cried out in pain as Baker strikes her buttocks, the news station reported.

In November, WICS reported that the Department of Children and Family Services (DCFS) had investigated Richard Rountree and his girlfriend five times in a year-and-a-half. A DCFS spokesperson confirmed to the news station that, on at least one instance, Rica Roundtree did not undergo a medical evaluation despite having injuries — which is a violation of protocol.

An investigator first visited the home in July 2017, after Rica Rountree said she was being whipped with a belt. The agency determined the claims were unfounded and returned the girl to her father, according to the news outlet.

When investigators visited in April 2018, Rica Rountree had a laceration on her face and a broken tooth. She claimed she suffered the injuries when falling into a door and medicine cabinet. Like before, abuse allegations were deemed unfounded.

Six months later, Rica came to school with two black eyes after missing two days of class. She told a DFCS investigator that she fell on some toys. The agency also closed that case.

Further, Rica Rountree had told one of her classmates that she was being abused before her death. The classmate testified that the slain girl said she “hated” living with her father because she always got hurt, according to WMBD.

WGLT reported that slain girl’s mother, Anntionetta Rountree, was in prison serving a sentence for forgery and a probation violation when her daughter died in Richard Rountree and Baker’s custody.

Days before her ex-husband’s arrest, Anntionetta Rountree told supporters at a rally outside of the Law and Justice Center of how she fought to save her daughter with no success. She claimed a drawn-out legal battle ended with her ex-husband and his girlfriend getting custody of the child for two years.

“Richard gets no sympathy—period. I went to court 101 times to get my daughter back,” the mother said while holding an urn containing her murdered daughter’s ashes.

In November, Baker was convicted of murder, aggravated battery of a child, child endangerment, and domestic battery. While Baker was scheduled to be sentenced later this month, it was vacated after her new attorney pushed to get her a new trial on the grounds of ineffective counsel.

Baker’s next court date is scheduled for February 24.