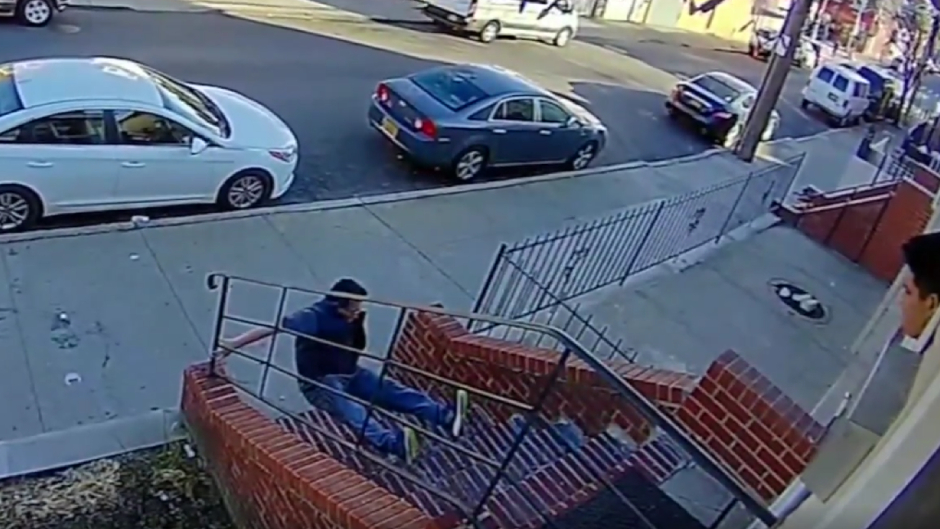 A doorbell surveillance camera reportedly caught the moment when a New York man pushed his landlord down a flight of stairs on Sunday, resulting in his death less than a day later.

The New York Post obtained footage which reportedly shows Edgar Moncayo, 71, on the front porch of his Queens property when tenant Alex Garces, 21, opens the front door. A brief physical altercation ensues, which apparently ends with Garces shoving Moncayo down eight stairs moments after he yells for his wife to “call the police.”

Moncayo is seen lying lifeless on the pavement after falling headfirst. The suspect and another man are seen walking past the man before one of them checks on him and presumably pulls out his phone to call someone.

***WARNING: The following video could be disturbing to some viewers. Please use discretion.***

Moncayo’s grandson told the Post that he was pronounced dead on Monday afternoon after being on life support with a traumatic brain injury.

His family told WABC that Garces was at least a month behind in rent. Moncayo reportedly lived downstairs with his wife and rented the upstairs unit. His grandson claimed that his grandfather had reduced Garces’ rent from $400 to $200 a month.

Garces was allegedly a problem tenant and had threatened to move out without paying. One of Moncayo grandsons, Andy Jativa, told the New York Daily News that his grandfather was a lenient landlord but he had two rules: no women and no children. Jativa said that Garces not only had his girlfriend over, but a crying baby that would be left alone in the upstairs unit.

On Sunday, Garces and his brother reportedly used a drill to gain entry into the Queens residence to retrieve his belongings. While WABC reported that Moncayo had gone to the property to collect the back rent, the Daily News reported that he was trying to get the pair to leave.

According to police sources who spoke to the Post, Garces initially claimed he was hauling a mattress out of the front door when he knocked into Moncayo, resulting in his fatal fall.

However, Christhian Guapi, 22, who is Garces’ brother who accompanied him to the home on Sunday, told the Daily News that Moncayo had jumped on Garces. Guapi also claimed that Garces and Moncayo had two physical altercations before Moncayo fell.

Police sources told the news outlet that Garces was jailed on manslaughter charges, though prosecutors have yet to officially charge him with a crime.