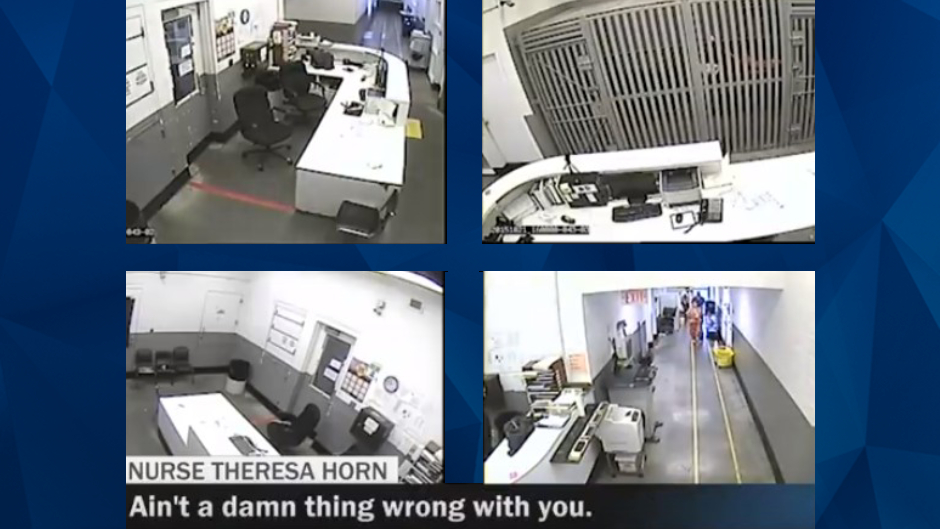 ‘If you can’t breathe, how can you talk?’: Jail staff filmed mocking & taunting dying inmate [Lawsuit]

Recently-released surveillance footage from an Oklahoma jail appears to show an inmate beg for help for days before he died of pneumonia and sepsis.

CBS News reported that the footage shows Terral Ellis Jr., 26, at the Ottawa County Jail in October 2015. Twelve days before his death, Ellis had turned himself in on an outstanding warrant for a DUI.

During the video, Ellis can be heard pleading for help from his isolated cell. CBS — who acquired one hour’s worth of footage — reported that workers were filmed mocking his screams.

“If you can’t breathe, how can you talk?” one jail employee was overheard saying.

Ex-jail nurse Theresa Horn was reportedly recorded yelling at Ellis and accusing him of faking his illness four hours before he was found lifeless in his cell. The nurse allegedly told him that EMS evaluated him and he was fine.

“I’m sick and tired of f**king dealing with your a*s. Ain’t a d**n thing wrong with you,” she said, according to CBS.

A 2017 federal lawsuit filed by Ellis’ estate accused the jail of wrongful death and negligence. The lawsuit listed the jail and various staff — including the jail’s former nurse, the former sheriff, and current sheriff — as defendants.

The medical examiner ruled that Ellis’ death was due to pneumonia and sepsis. Dan Smolen, the lawyer representing the deceased man’s family, said the 26-year-old was healthy when he entered the jail.

The sheriff’s office manages the Ottawa County Jail. Ottawa County Sheriff Jeremy Floyd, who is named in the lawsuit, told The Miami News-Record that he has received death threats — even though Ellis’s death occurred on Sheriff Terry Durborow’s watch (Floyd was elected in 2016).

Floyd told CBS News that he was “floored” when watching the years-old jail footage. He also said that the jail’s current medical protocols are unrivaled.

The News-Record reported that the federal lawsuit also seeks damages from Integris Miami EMS for allegedly failing to transport Ellis to the hospital.

Horn no longer works at the jail. In a statement issued to CBS, her attorney claimed that the released footage does not show the full picture.