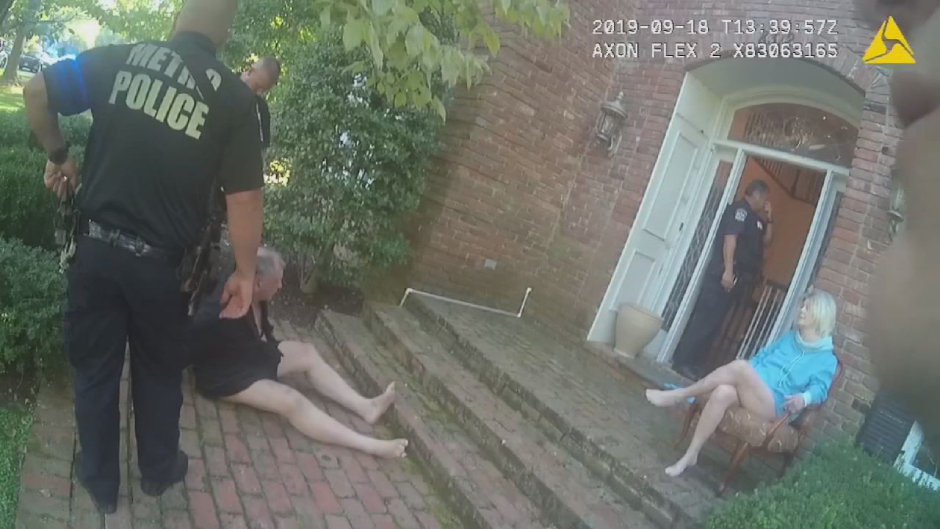 A Kentucky man filed a lawsuit against two police departments earlier this month, alleging officers violently dragged him out his home and threw him to the ground while investigating a shooting that turned out to be a false alarm.

The September 2019 bodycam footage was released in light of the lawsuit Frank Serapiglia, 71, filed against the Louisville Metro and Jeffersontown Police Departments on March 5. KDRB reported that officers were banging on Serapiglia’s door after receiving a false call that he had shot his wife in the head.

Bodycam footage shows Serapiglia open the door seconds before an officer grabs him and hurls him outside — where he lands face-first onto the pavement. An officer is heard yelling for Serapiglia to “get on the f***ing ground” as Serapiglia says he can’t breathe and asks what’s happening.

***WARNING: The following video depicts violence and language that could be offensive to some viewers. Please use discretion.***

According to KDRB, Louisville Metro police Officer David Stettler told Sergeant Jerome Passafume that Serapiglia was being “non-compliant” and refused to leave his home. Stettler reportedly also claimed that the septuagenarian had “lost his footing” when Officer William Kline hurled him from his front door.

The news station reported that Serapiglia’s wife made the emergency call from their home. She was in a “delusional state” when she called 911 and claimed her husband shot her in the head, according to the lawsuit.

Footage shows Serapiglia’s wife coming outside during the ordeal. While she appears disheveled, she is unharmed, prompting an officer to tell dispatch that a shooting hadn’t occurred.

“We’re out,” a Jeffersontown police officer says as another officer laughs.

Notably, Serapiglia remained handcuffed for several minutes as he tried to grasp what had occurred. His wife ultimately tells him that she called 911 because he shot her in the head. Serapiglia then berates the officers for how they responded to the call.

“What did you think we were going to do? Say ‘Hey good morning, did you shoot your wife in the head?’,” a sergeant asks Serapiglia.

Still handcuffed, Serapiglia explains that his wife suffers from mental health issues and seizures and was recently hospitalized. His lawyer told WDRB that police should’ve known the call was suspicious as Serapiglia’s wife couldn’t tell the 911 dispatcher whether she was bleeding and she didn’t sound distressed or afraid.

“Thank you guys, for f**king protecting me,” Serapiglia is heard saying after a back-and-forth with officers.

Serapiglia was reportedly hospitalized for multiple injuries, including head trauma.

The city of Jeffersontown is also listed as a defendant in the lawsuit. Jefferson police have not provided the bodycam footage or any other documents pertaining to last year’s emergency call, according to the suit.

Both police departments declined to comment on the pending litigation.