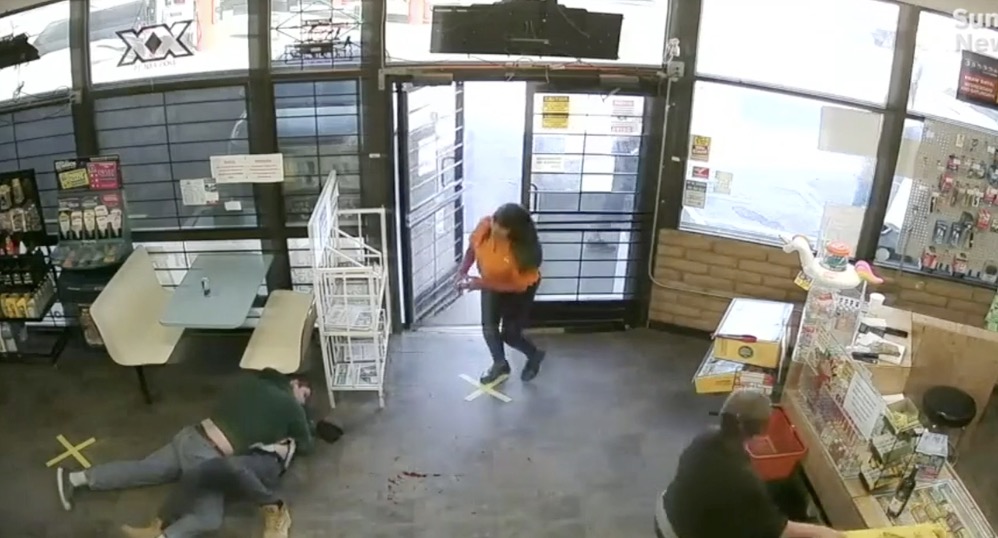 A 22-year-old man tried to make off with a woman’s three children on Wednesday at a bus stop in Doña Ana, New Mexico, but the attempted kidnapping was foiled by a 16-year-old high school wrestling champion who pinned the man down inside a gas station and held him there until police arrived.

Canaan Bower, who won his district heavyweight match in February, was filling his truck with gas across the street when he saw the commotion at Chucky’s Gas Station, which also serves as the Greyhound drop-off point.

“Punches were being thrown and [he could hear] screams of terror, so he jumped in his truck and went across the street,” Canaan’s dad Troy Bower told the Las Cruces Sun-News. “By the time he got there, they had gone inside and so he got out of his truck and went inside — and there was a whole bunch of blood all over the floor.”

Canaan saw the suspect, identified as Daniel Beltran Arroyo, trying to to kick in a door to an employees only area.

“So my son — who just won the wrestling district championship weeks ago — just came up behind this guy and body-slammed him and got him in a chokehold and waited for the police to show up,” Troy said.

Surveillance video shows the stunning scene from beginning to end. An outdoor camera captures the initial scene: A mother and her three children — ages 9, 2, and 1 — had gotten off a bus and were waiting for an Uber. She later told police she saw Arroyo staring at them until he suddenly grabbed the 2-year-old’s arm and orders the woman to give him the children. Chaos erupts as the woman kicks Arroyo, he punches her, and employees and witnesses flood out of the store trying to help.

Eventually the woman and her children break free and run inside the store, with Arroyo right behind them. A man inside tries to hold the door closed, but Arroyo forces it open and pushes the man down. Witnesses told police Arroyo punched at least two people and the mother outside the store and at least three more inside the store. He ran around the store shouting “give me the kids,” they said.

That’s when Canaan Bower enters, and in moments he has pinned Arroyo to the floor while others can be seen on the phone, presumably calling the Doña Ana County Sheriff’s Department. One woman whacks Arroyo over the head with a yellow “wet floor” sign, and later comes back to kick him.

Bower just holds the man down until a deputy enters the store. In seconds, he flips Arroyo onto his stomach and handcuffs him. The entire incident is finished in seven minutes.

Troy Bower told the Sun-News he was proud of his son but also frightened when he knew the extent of what he’d done.

“I wanted to wring his neck,” he said. “You fear for your own child’s safety in that situation. You don’t know if this guy’s maybe got a gun or a knife — you don’t know what this guy’s capable of. I’m sure other people saw what was going on and didn’t get involved. It’s very terrifying that your child put himself at risk but, at the same time, confident that he would do the right thing and succeed in doing it.”

The sheriff’s department said there was no indication Arroyo and the family involved knew each other. He has been charged with four counts of battery, two counts each of assault and child abuse, and one count of kidnapping.