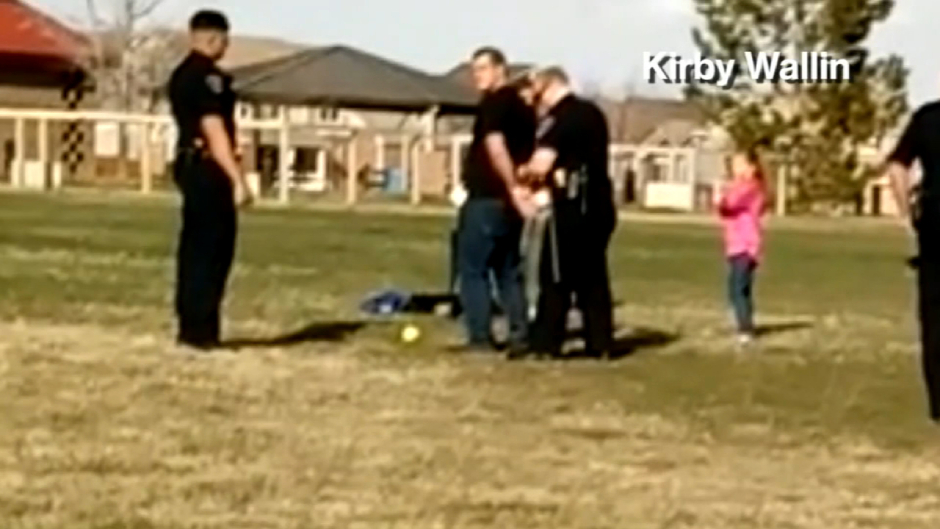 VIDEO: Ex-cop arrested in park for playing ball with daughter amid coronavirus pandemic

A police department in Colorado has apologized to a man they arrested Sunday for allegedly violating social distancing rules by playing ball at a park with his family.

Brighton police arrested Matt Mooney, 33, a former Colorado state trooper, at Donelson Park as he played tee-ball with his wife and 6-year-old daughter. KDVR reported that a sign at the park read “closed” but, in smaller print, stated that the park was open to groups no larger than four for “walking, hiking, biking, running, and similar activities.”

“She’s like, ‘Daddy, I don’t want you to get arrested.’ At this point, I’m thinking, ‘There’s no way they’re going to arrest me, this is insane,'” Mooney recalled. “I’m telling her, ‘Don’t worry, Daddy’s not going to get arrested. I’ve done nothing wrong. Don’t worry about it,’ and then they arrest me.”

Video posted to Facebook April 6 shows Colorado man 33-year-old Matt Mooney being handcuffed at Donelson Park before he was detained by Brighton police officers and placed in the back of a police car for 10 minutes. His crime? Breaking social distancing rules at the empty park where he was playing tee-ball with his 6-year-old daughter who witnessed the incident. "During the contact, none of the officers had masks on, none of them had gloves on, and they’re in my face handcuffing me, they’re touching me," Mooney said.FULL STORY: https://bit.ly/39OQlEw

Ex-Brighton City councilman Kirby Wallin reportedly filmed Mooney’s arrest. Mooney claimed he wasn’t violating social distancing rules by being at the near-empty par,k but the officers who arrested him said he was.

“During the contact, none of the officers had masks on, none of them had gloves on, and they’re in my face handcuffing me, they’re touching me,” he told KDVR.

In a statement issued Tuesday, Brighton police said City Manager Marv Falconburg called Mooney to schedule a meeting so the police department could apologize to him in person.

According to police, officers responded to the park and spotted a group of 12-15 people apparently playing softball. The officers asked them to disperse due to their incorrect understanding that the park was closed amid the coronavirus epidemic.

The Brighton Police Department said they’re conducting an internal investigation into Mooney’s arrest, which they described as an “overreach.”

The statement read, “As officers are required to interpret several layers of state public health orders and local closures as they change, there may have been a misunderstanding about the park closure.  It is imperative that we improve communication with our front line first responders so they are up to date on the latest rules in place regarding COVID-19 for addressing public safety.”

Join Nancy Grace for her new online video series designed to help you protect what you love most – your children.
[Featured image: ABC News video screengrab]