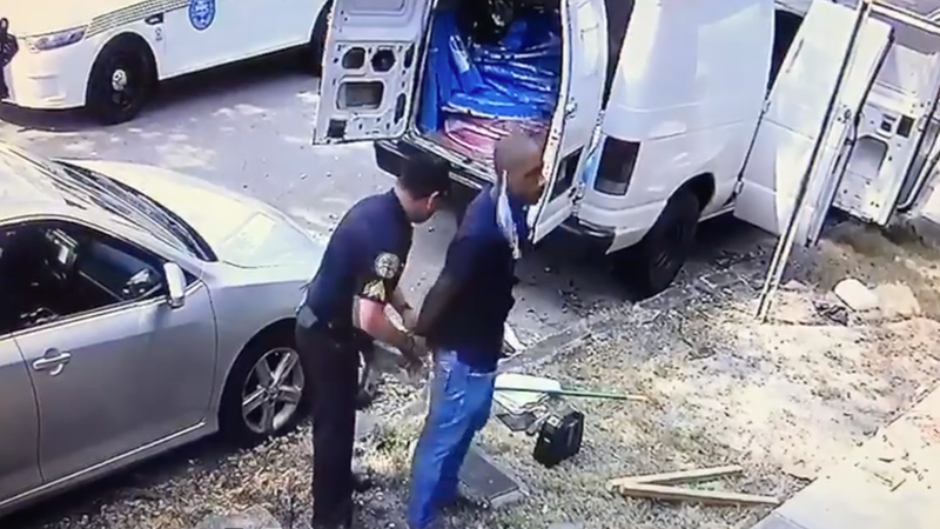 SEE IT: Doctor testing & helping homeless amid coronavirus pandemic is cuffed outside his own home [Reports]

The doctor claims the police sergeant was spitting in his face, and he is now worried for his health

Officials in Florida have launched an internal investigation into the handcuffing of a doctor who has been testing the homeless amid the coronavirus pandemic.

A Miami police sergeant reportedly detained Dr. Armen Henderson, 34, an internal medicine physician at the University of Miami Health System, in front of his home on Friday morning. Henderson told the Miami Herald that the officer approached him as he unloaded his cargo van, claiming he was investigating complaints about people dumping trash in the area.

Henderson has been in news headlines for administering COVID-19 tests to the homeless, directly violating the mayor’s orders to stay off the streets. The doctor and several other nonprofit groups have also been handing out toiletries and other essentials to the at-risk group.

Henderson told ABC News that the encounter with the seargent escalated after he said, “OK, thank you, officer.”

”I guess he must have thought that I had disrespected him or something like that. He jumped out of the car and started yelling, ‘You call me sergeant when I’m talking to you, and blah, blah, blah. And, you know what, give me your I.D.’,” he recalled.

Henderson told the news outlet that he believes the sergeant detained him because he’s black. The doctor expressed concern about his wellbeing because the officer wasn’t wearing a mask during the close encounter.

“He put me at risk. Now I feel like I should get tested, honestly. Most likely I will because he definitely was spitting in my face. I could feel it while he was yelling at me,” Henderson told ABC News.

“That is the genesis of the stop. What happens after that, what’s being discussed, the actions taken, etc., all that needs to be investigated. And it will be investigated,” Colina said.