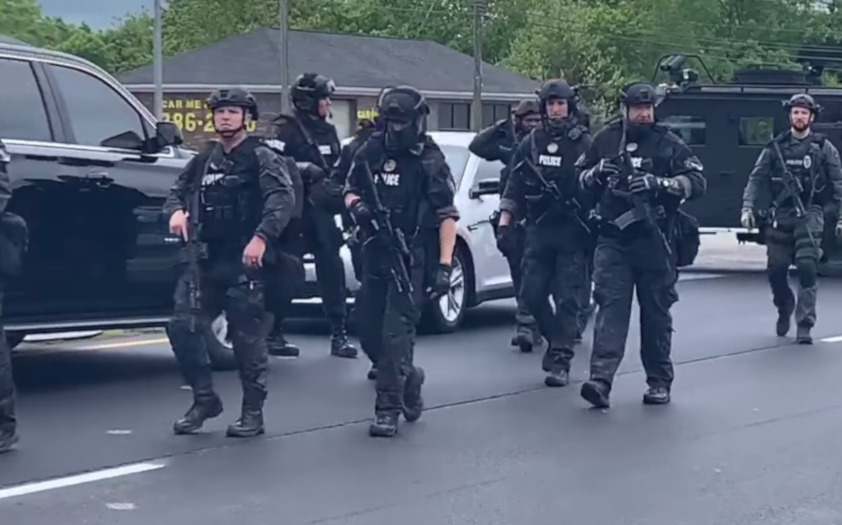 Birmingham police captured a suspect wanted for murder in Auburn, Alabama, after an hours-long manhunt that included a brief shoot-out with officers. The as yet unidentified suspect was wounded in the shoot-out and is receiving treatment, Deputy Chief Scott Praytor said.

Praytor said the ordeal began late Friday night in east Birmingham when officers responded to a call about a stolen vehicle involved in a homicide in Auburn was spotted at a motel just off Interstate 20.

Officers set up a perimeter, and K-9 units joined the search. A silver sedan tried to drive through the perimeter, Praytor said, and officers attempted to stop it. The suspect fired at the officers, who returned fire.

The suspect exited the vehicle and fled, leaving the car to crash into a ditch. Praytor said the car was registered to a person who lived on a nearby residential street; when officers investigated, they found a person inside the home dead from an apparent gunshot wound.

Praytor said the investigation has not yet confirmed that homicide is related to the suspect, but evidence indicates that it likely is.

The deputy chief said that investigators are talking with several witnesses, including a person of interest they found with the suspect. “We’re trying to determine if that person was with him in Auburn as well,” he said.”

“The preliminary investigation suggests the suspect is responsible for the homicide in Auburn and possibly related to a couple homicides they had in Dadeville, as well as a couple other robberies throughout the state,” Praytor said.

The suspect is facing “multiple counts of capital murder for the most part, robberies, attempted murders,” he said.

Auburn police told AL.com that they were interested in the suspect in relation to a 54-year-old woman found dead of gunshot wounds inside a burning pickup truck Friday morning. Auburn police identified the victim as Nancy A. Nash from Phenix City, Alabama. Her black 2019 Nissan Frontier was the vehicle spotted at the motel in Birmingham. It’s now being returned to Auburn for their investigation.

And Dadeville Police Chief Johnathan Floyd told AL.com that Willie Tidwell, 61, and his wife Barbara, 65, had been found dead in their home Friday night in a possible robbery. He said he has not ruled out a link to the crimes in Auburn and Birmingham.