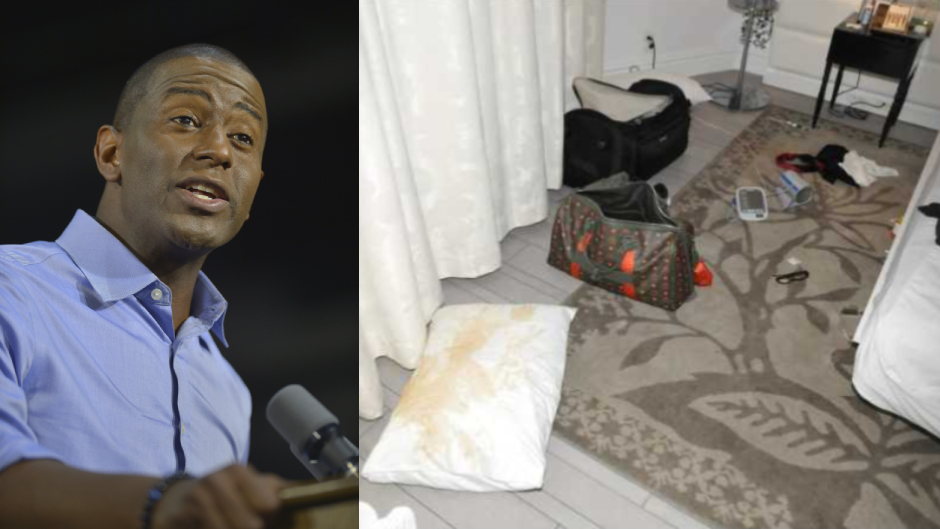 Responding officers wrote that they couldn’t speak to Gillum due to his “inebriated state.” However, he was able to speak to firefighters a short time later.

According to the South Florida Sun-Sentinel, police claimed they discovered three plastic baggies of crystal meth on the bed and floor of the hotel room. The 26 photos released this week apparently show baggies of drugs, soiled bedsheets, and a vomit-stained pillow.

On the night in question, Mejias reportedly told officers that he entered the room and found Gillum and Dyson vomiting. Mejias claimed he called 911 after the alleged escort collapsed.

During the 911 call, the dispatcher is heard telling an unidentified man, presumably Mejias, how to conduct chest compressions. While officials also released bodycam footage from that night, it’s heavily blurred and redacted and has no sound.

After the ordeal, Gillum  — a married father-of-three and CNN political analyst —  said in a written statement that he was attending a wedding in Miami when emergency responders were called to tend to one of his friends. He also denied using methamphetamines.

“This has been a wake-up call for me,” he said. “Since my race for governor ended, I fell into a depression that has led to alcohol abuse. I witnessed my father suffer from alcoholism and I know the damaging effects it can have when untreated. I also know that alcoholism is often a symptom of deeper struggles.“

In addition to narrowly losing a 2018 bid to become Florida’s governor, Gillum is the former mayor of Tallahassee.

No arrests were made in connection with the March 13 incident. Miami Beach police also indicated that they weren’t treating it as a criminal matter.