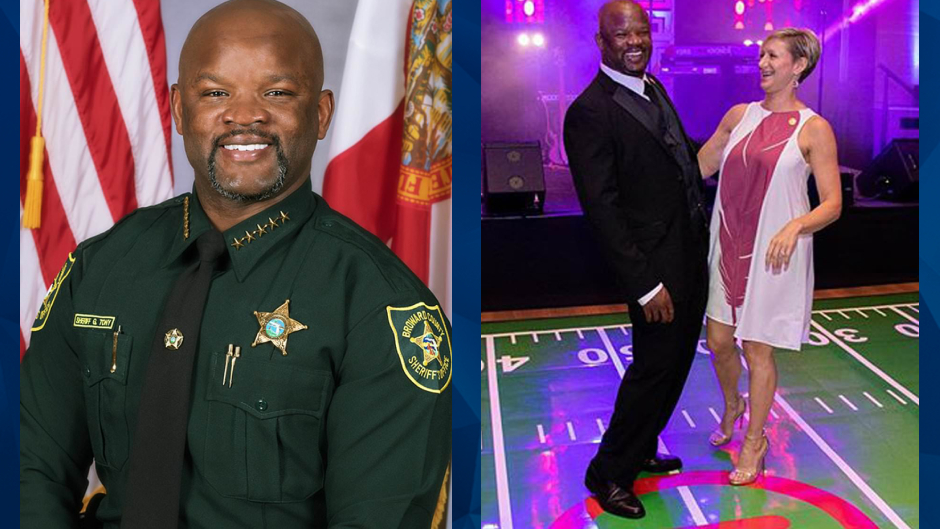 A Florida sheriff who recently revealed that he fatally shot someone when he was 14 is now accused of attending couple-swapping parties with his wife.

The Daily Mail reportedly reviewed 11 photos showing Broward County Sheriff Gregory Tony, 41, and his wife at a swinger party. The alleged images are reportedly from August 2015 and April 2016 at monthly ‘Liquid Bliss’ parties in Miami.

According to the Daily Mail, the pictures show Tony, wearing boxer briefs, alongside his topless wife. Tony was allegedly photographed posing with his wife and another man. In another photo, Tony and his wife are seen with another couple.

The Daily Mail report comes days after Florida Bulldog reported that Tony shot and killed a man in Philadelphia in 1993.

Tony, then 14, was reportedly arrested and charged with murder and firearms violations for fatally shooting Hector Rodriguez, 18. The Philadelphia District Attorney’s Office initially charged Tony as an adult but the homicide case was transferred to juvenile court.

Tony was found not guilty and the presiding judge ordered the case file sealed. The Bulldog explained that they acquired a police report which detailed the fatal shooting.

While Tony confirmed the fatal shooting to the watchdog publication, he allegedly didn’t disclose his arrest when he applied to become a police officer in Coral Springs a decade earlier.

“This was the most difficult and painful experience of my life and I have never spoken of it publicly,” he said. “I worked every day from that time forward to leave the violence that surrounded me in Philadelphia behind.”

Speaking with WTVJ, Tony claimed Rodriguez pulled a gun on him and his older brother, who was 15 or 16 at the time, during a verbal altercation. The sheriff claimed Rodriguez followed them into a home before he located his father’s gun and shot him.

Tony told the South Florida Sun-Sentinel that he doesn’t believe he was technically “charged with a crime” and that he killed Rodriguez in self-defense.

The Broward County sheriff claimed he’s since talked to the Governor DeSantis about the deadly incident.

“The Governor understood. He said, ‘look, from a legal standpoint you did what you had to do to survive,’ and he encouraged me to stay focused on doing the right thing for this community and not letting political opposition and slandering keep me from safeguarding the nearly two million people here,” Tony told WTVJ.

In light of the Bulldog’s exposé, since-retired Coral Springs police Chief Duncan Foster confirmed to the Sun-Sentinel that Tony wouldn’t have been hired if he disclosed the 1993 fatal shooting in his application.

Foster said, “All things being equal, there are more qualified candidates who did not have involvement with the criminal justice system to the extent that he did.”