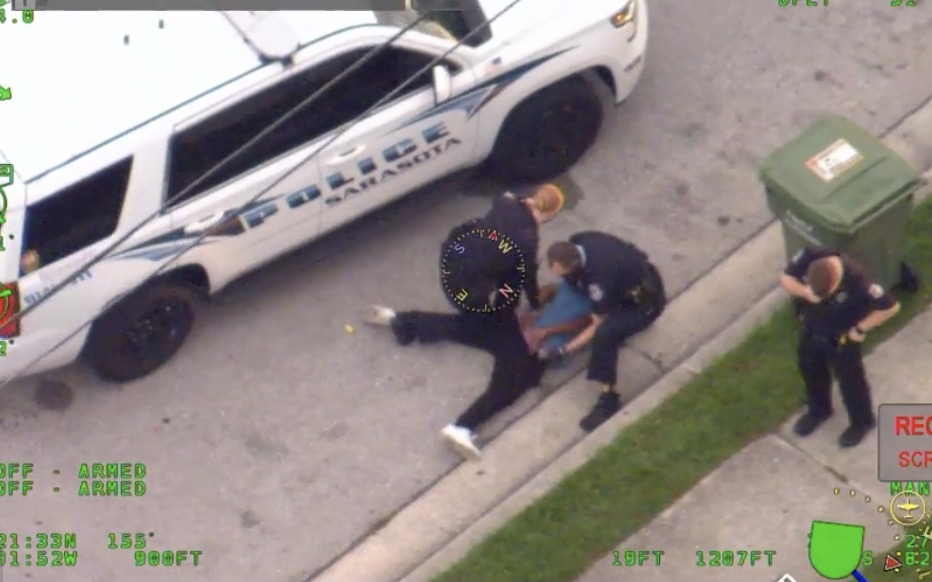 Sarasota police launched an investigation this week after a video was released of a mid-May incident that showed one of their officers kneeling on the neck of a 27-year-old man they were trying to take into custody, WFTS reported.

The video was posted on social media on Monday by Terria Johnson, mother of the suspect seen in the video, Patrick Carroll. Sarasota police said they were unaware of a problem with Carroll’s arrest until someone tagged them with the video on Facebook..

Police Chief Bernadette DiPino immediately placed the officer, who has not been identified, on administrative leave and launched the investigation.

The incident took place on May 18, police said, when officers responded to a domestic violence call. In the video, two officers are trying to take Carroll into custody while a third officer watches. One of the officers has his knee on Carroll’s neck, similarly to the way former Minneapolis police officer Derek Chauvin was filmed leaning into the neck of George Floyd, who died under the restraint.

“While he’s saying I’m resisting I’m just moving around so I can have circulation in my body and my throat,” said Carroll. Carroll was arrested on charges related to battery/domestic violence, possible ammunition by Florida convicted felon and resisting law enforcement officer without violence.

Carroll was arrested on charges of domestic battery, resisting a law enforcement officer without violence, and possession of a weapon or ammunition by a convicted felon, according to jail records.

“I just want the Sarasota Police Department to know that I’m upset and I’m not going to stop until somebody has a reasonable explanation as to why he was detained in that manner,” said Carroll’s mother.

Carroll’s family said they didn’t want to see violence over his arrest, but instead wanted to urge change.

In addition to cell phone video of Carroll’s arrest, the Sarasota County Sheriff’s Office released aerial footage captured from a helicopter hovering over the scene.