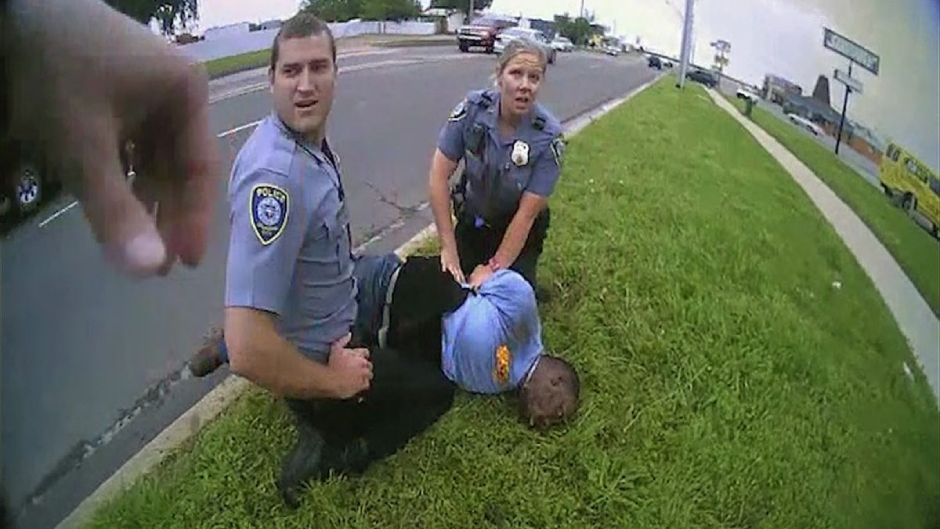 SEE IT: ‘I don’t care,’ cops says as ANOTHER dying man says he ‘can’t breathe’ while pinned down during arrest

The Oklahoma City Police Department released May 20, 2019, footage showing the arrest of Derrick Scott, 42. Police Captain Larry Withrow said officers arrested Scott after receiving a call about a man causing a disturbance and “brandishing a firearm.”

Withrow alleged that Scott ran from police officers who ultimately apprehended him and recovered a loaded handgun from his front pocket.

Three officers were filmed using their knees and hands to pin Scott to the ground for 13 minutes before paramedics arrived. Scott is heard yelling, “I can’t breathe,” and begging for help before he loses consciousness.

During the ordeal, officers can be heard suggesting Scott was faking his unconsciousness.

***WARNING: The following video could be disturbing to some viewers. Please use discretion. ****

Withrow said the arresting officers called for medical assistance after Scott stated he couldn’t breathe. Withrow also claimed that officers rolled Scott off of his back into a “recovery position,” allowing Scott to comfortably breathe while officers maintained control.

“It’s not uncommon for people, when you’re struggling with them, when you’re trying to get him under control, to say, ‘I can’t breathe.’ You hear that frequently,” the police captain commented.

Citing an autopsy, The Oklahoman reported that Scott died at the hospital an hour later due to a collapsed right lung. The report stated that additional factors — physical restraint, bullous emphysema, atherosclerotic heart disease, asthma, and recent methamphetamine use — also contributed to his death.

Despite the medical examiner’s findings, Scott’s manner of death was listed as “undetermined.”

***WARNING: The following video could be disturbing to some viewers. Please use discretion. ****

KOCO reported that the four responding Oklahoma City officers were ultimately cleared of any wrongdoing in regards to Scott’s arrest.

“This guy runs from the police. He’s got a 90% occluded major artery in his heart. I mean, he’s just a perfect candidate to die when you’ve got meth in your system and those kinds of physical ailments and then you fight with police,” Prater told the Associated Press this week. “ They (officers) didn’t do anything wrong at all.”