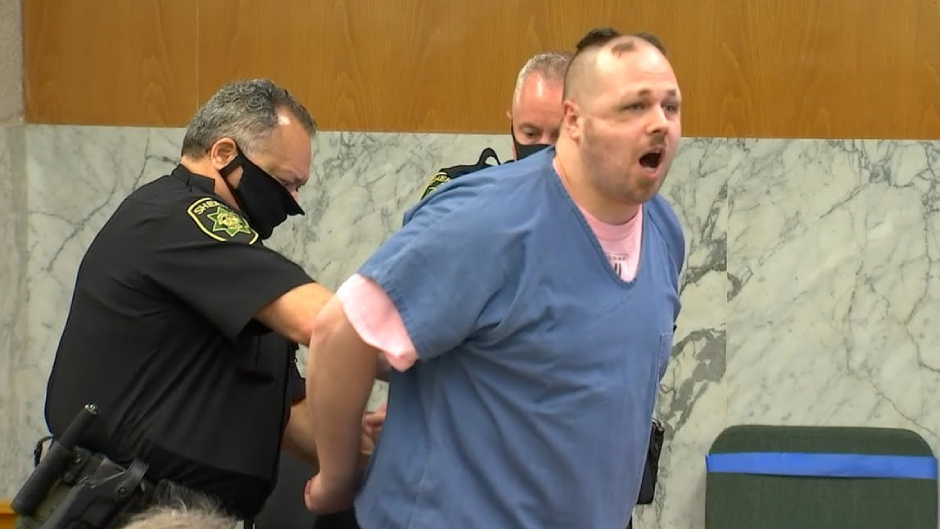 An Oregon man who murdered two men on a train in May 2017 was sentenced to life in prison on Wednesday — a day after he was ousted from the courtroom for swearing at and threatening a woman as she provided her victim impact statement.

Jeremy Christian, 38, was convicted of fatally stabbing Ricky John Best, 53, and Taliesin Myrddin Namkai-Meche, 23, on a MAX light-rail train in Portland. A third man, Micah David-Cole Fletcher, was stabbed in the neck but survived.

Best and Namkai-Meche were killed after the pair defended two Black teens — one who was wearing a hijab — as Christian hurled Islamaphobic, racist, and xenophobic epithets at them.

On Tuesday, Demetria Hester took the stand and testified that a day before the double murder, Christian hit her in the eye with a half-filled Gatorade bottle, inflicting serious injuries. She said police declined to arrest Christian even though she and two public transit supervisors alerted them to the assault.

***WARNING: The following video includes language which could be offensive to some viewers. Please use discretion.***

Christian flew into a rage after Hester called him a “waste of breath” that his mother “should’ve swallowed” and that he should rot in hell.

“See you there. I should have killed you, b***h,” Christian boomed while ripping off his face mask.

Christian chanted “George Floyd” and told Hester to “go back to Tennessee” as bailiffs hauled him out the courtroom.

In addition to first-degree murder and attempted murder charges, Christian was also found guilty of intimidation or hate crimes. Those charges stemmed from the assault involving Hester and the deadly incident which occurred a day later.

Though Christian was convicted in February, his sentencing was delayed due to the coronavirus pandemic.

According to The Oregonian, Christian read his statement from a separate room following Tuesday’s outburst. He continued to deny responsibility, calling his trial “a farce” and his conviction “laughable.”

“I did not commit an act of violence on that train,” he said, blaming the sole surviving stabbing victim.

“I do regret that two people died, but I do not regret my actions.”