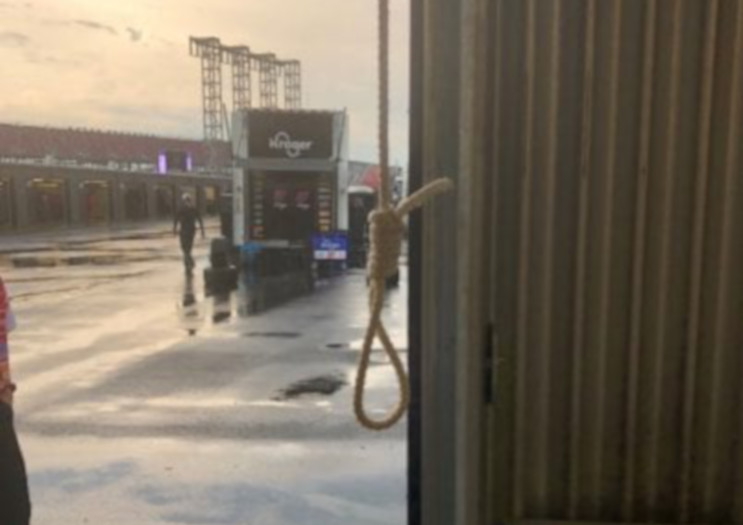 NASCAR officials released a photo on Thursday of the garage pull rope in Bubba Wallace’s stall that had been tied as a noose.

As CrimeOnline previously reported, an FBI investigation into a reported noose found in the stall this month determined that it had been there since 2019. The rope was a “garage door pull rope fashioned like a noose,” authorities said.

“As you can see from the photo, the noose was real, as was our concern for Bubba,” NASCAR President Steve Phelps, according to NASCAR.com. “With similar emotion, others across our industry and our media stood up to defend the NASCAR family. Our NASCAR family. Because they are part of the NASCAR family, too. We are proud to see so many stand up for what’s right.”

Wallace is the only Black man driving full-time for NASCAR currently, and one of very few who have ever been full time drivers. He also won a truck series race at Martinsville, Virginia in 2013, sponsored by NASCAR. He drives the #43 Chevrolet owned by Richard Petty Motorsports. Earlier this month, he drove a car with a Black Lives Matter livery, and he was instrumental in convincing NASCAR to ban the Confederate flag at its events.

The rope was found in garage number 4, according to investigators. That particular garage stall was assigned to Wallace last week. However, evidence and a video confirmed by NASCAR showed that the rope had been in garage number 4 since October 2019, possibly during the NASCAR playoffs event at Talladega October 11-13. Because of that, investigators and NASCAR determined that Wallace had not been targeted by the noose.

Meanwhile, Wallace has been facing a lot of backlash following the incident, but he said it was clear the rope had been made into a noose — and that he had nothing to do with it.

“I’m mad because people are trying to test my character and the person that I am and my integrity,” Wallace told CNN’s Don Lemon during a Tuesday night interview.

“It was a noose. Whether tied in 2019 or whatever, it was a noose. So, it wasn’t directed at me but somebody tied a noose. That’s what I’m saying.”

NASCAR said its investigation — which covered 1,684 garages at 29 tracks —  showed that only 11 garage stalls have rope pulls. Out of the 11 with rope pulls, only one rope had been tied to resemble a noose.

In an interview with First Take on Wednesday, Wallace acknowledged that the FBI took swift action to diffuse the situation and thanked them for the investigation, adding that he was relieved he was not targeted.

Phelps said on Thursday that Wallace had nothing to do with the rope and had no idea it was there until a teammate found it.

“Bubba Wallace and the 43 team had nothing to do with this,” Phelps said. “Bubba Wallace has done nothing but represent this sport with courage, class and dignity.”

Phelps noted the controversy over Wallace’s Black Lives Matter car at Martinsville and NASCAR’s decision to bar the Confederate flag from its events, specifically thanking “Bubba for his leadership over this past three weeks.”

“He stood tall for what he believes in,” Phelps said. “And we all need to stand with him. I know I’m going to.”