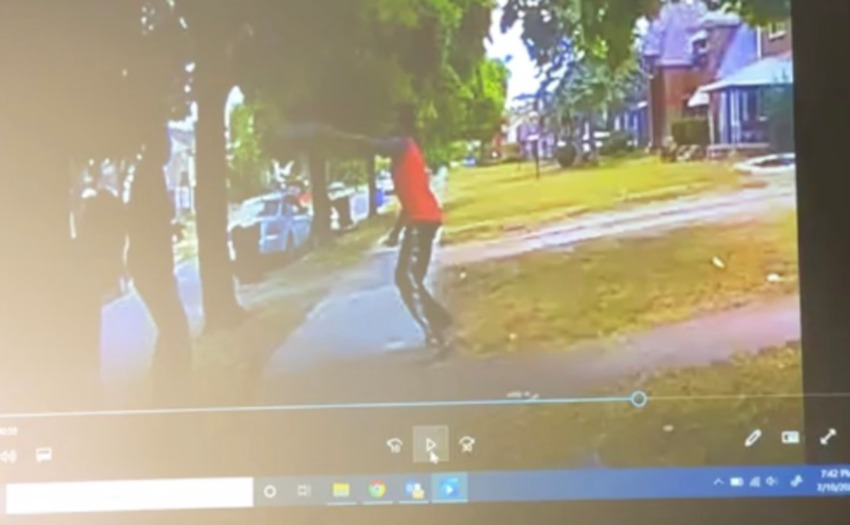 Detroit police released dash- and body-camera footage from a fatal shooting just hours after it happened on Friday, showing the suspect pulled a gun from his pocket and fired at an officer before other officers returned fire, and killed him.

The video, he said, debunked rumors that Littleton was unarmed, shot 16 times, and was executed.

Craig said police were on the scene in northwest Detroit to arrest a man on a drug warrant and who was believed to have ties to a July 5 block party shooting that killed three people. That man, identified as Darnelle Sylvester, is wearing a white t-shirt in the videos and immediately puts his hands up. He offers no resistance as police handcuff him and put him down on the ground.

Littleton, who was wearing an orange shirt and had been standing near Sylvester when police arrived, initially raised his hands as well but brought them down when he realized police were after Sylvester. While the officers are handcuffing Sylvester, Littleton turns away and appears to take something out of his left pocket. It’s not clear in the dashcam footage that Littleton pulls a gun from his pocket and fires directly at an officer, who pursues him without drawing his own gun. Other officers fire at Littleton, and he falls to the ground.

Chief Craig gives an update regarding the officer involved shooting that occurred on the city’s west side. Video of incident was also provided with an explanation.

The bodycam footage, however, shows the gun in Littleton’s hand as he pulls it out and the smoke from the muzzle when he fires at the officer. Craig said he fired twice at that point and two more times as he fell. Three police officers fired four shots, he said.

Craig called the officer Littleton shot at a “hero” for pursuing him without drawing his weapon and said it was “simply a miracle he wasn’t struck in the head.”

The chief said that he released the footage as quickly as possible because rumors were spreading quickly.

“It’s always tragic when a police officer has to use force,” Craig said. But “this knee-jerk reaction to not knowing facts is a problem … It’s to incite others.”

Craig added that Littleton’s family “weren’t happy” when police explained what had happened, “but they believed what we said, and I greatly appreciate that.”

Late Friday night, Wendell Anthony, president of Detroit’s NAACP branch, said the incident shows the value of police cameras to help “dispel and explain situations that could possibly lead to deep division and even conflict.”

“This is a very challenging time in the history of police and community relations throughout our nation,” he said in a statement. “It must be noted that even in this situation, what could have been an over-reaction was toned down and peacefully concluded on both the part of the police and the community protesting what some thought was an injustice. This situation could have gotten well out of hand. A disaster was avoided.”