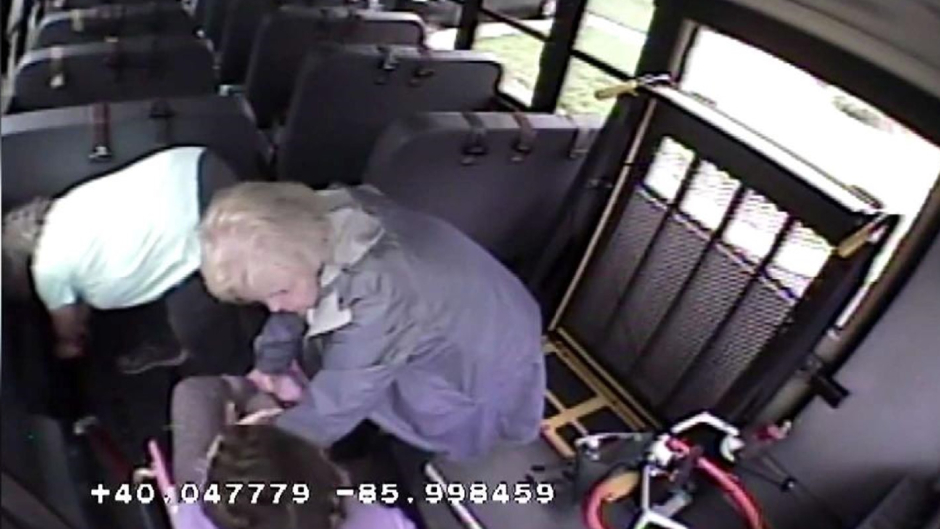 An Indiana woman whose disabled 10-year-old daughter was slapped by a bus aide last year filed a lawsuit on Tuesday, claiming the school district was negligent in protecting her child.

Per a lawsuit filed in Hamilton County Superior Court, Elizabeth Hartman said Noblesville Schools failed to adequately train and supervise former bus aide Franchella Van Fossen. In May 2019, Van Fossen, then 56, was filmed strapping Hartman’s daughter’s wheelchair in the back of a school bus when she slaps the child, according to WTHR.

“I shouldn’t have done that I know but she bit me,” Van Fossen was heard telling a bus driver who was helping secure the child.

The surveillance footage also showed Hartman’s daughter, named Riley, flailing her arms and kicking her feet as Van Fossen and the bus driver strapped in her wheelchair. The two women were also recorded repeatedly telling Riley to stop kicking and hitting them.

Five years earlier, Riley reportedly suffered a traumatic brain injury in a car accident that killed her father. Due to the accident, Riley is nonverbal, requires help with basic needs, and uses a wheelchair “due to a lack of strength,” court documents explained.

In October, Van Fossen pleaded guilty to battery charges and was sentenced to 10 days in jail and six months’ probation. The school bus aide initially told investigators that she only touched Riley’s face after the student bit her, according to WTHR.

The attorney representing the victim’s family, Catherine Michael, told the Indianapolis Star that Riley is cognizant of when she is being slapped. Michael said Riley experiences leg spasms due to her brain injury, and claimed the child was in pain because of the way she was being restrained.

The lawyer also claimed that Noblesville Schools did not sufficiently train staff to handle students with special needs.

The family’s seeking damages of $700,000 for mental and physical distress they suffered because of last year’s incident. According to the Star, Hartman ultimately enrolled her daughter in a homebound education program within Noblesville Schools.