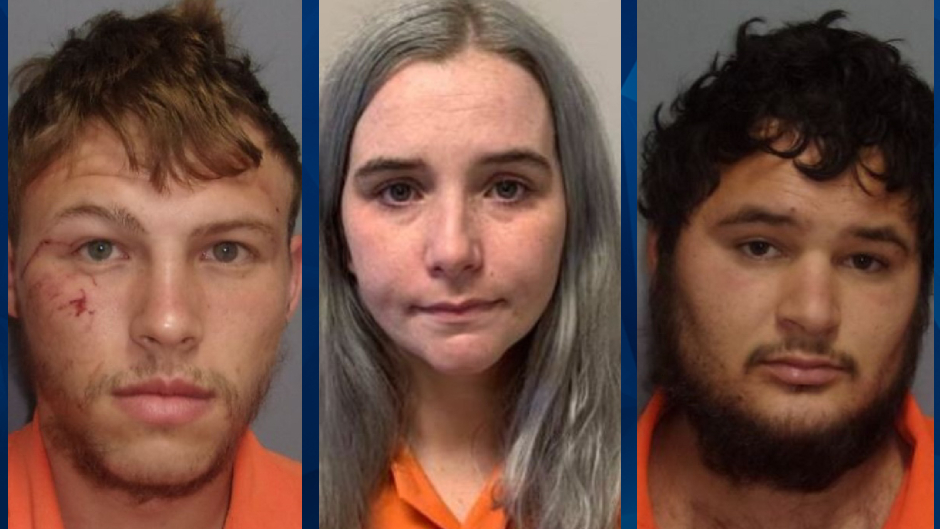 Trio arrested after 7-year-old girl is found battered & bruised in ‘one of the worst’ abuse cases cops have ever seen: Report

Police in Louisiana arrested three people last week after reportedly locating a 7-year-old girl who was battered and choked while in one of the suspects’ care.

The Vernon Parish Sheriff’s Office said in a statement that Dakota Singletary, 22, and Allen Fulks, 22 were involved in a car accident in Rosepine on July 6. As police responded to the scene, Stacy Lynn Tharpe, 29, (pictured center) arrived with her children — but without a 7-year-old girl who was reportedly left in her care.

It’s not immediately clear how the responding Rosepine officer, Robert Green, knew about the child placed in Tharpe’s care. KTAL and KMSS reported that Rosepine is a small town, and that Tharpe told Green the girl was with her mother.

However, Vernon Parish police alleged a witness at the scene claimed the girl was still in Tharpe’s care. An investigation reportedly uncovered that the girl’s mother left her with Tharpe in February and hadn’t returned.

Green and a Louisiana State Police trooper ultimately went to Tharpe’s home — where they reportedly found the 7-year-old with bruises all over her body. According to police, the girl said Fulks and Singletary (pictured left, right) repeatedly pummeled her and choked her until she passed out. Authorities alleged the girl’s hair had been cut off.

“Officers observed severe bruising to the child’s face. The child’s eyes were almost swollen shut,” the press release detailed. “The victim told deputies that she was tired and couldn’t take the abuse any longer.”

A day after the car accident, Fulks and Singletary spoke to police and reportedly confessed to abusing the 7-year-old.

Tharpe allegedly admitted to watching the abuse during a police interview conducted on July 8. Police said Tharpe failed to report the abuse, and attempted to hide the girl’s injuries by leaving her home alone.

“The physical and emotional trauma suffered by this child is one of the worst, if not the worst case of child abuse, that has occurred in Vernon Parish,” police remarked.

Police said the victim remains hospitalized for her injuries.