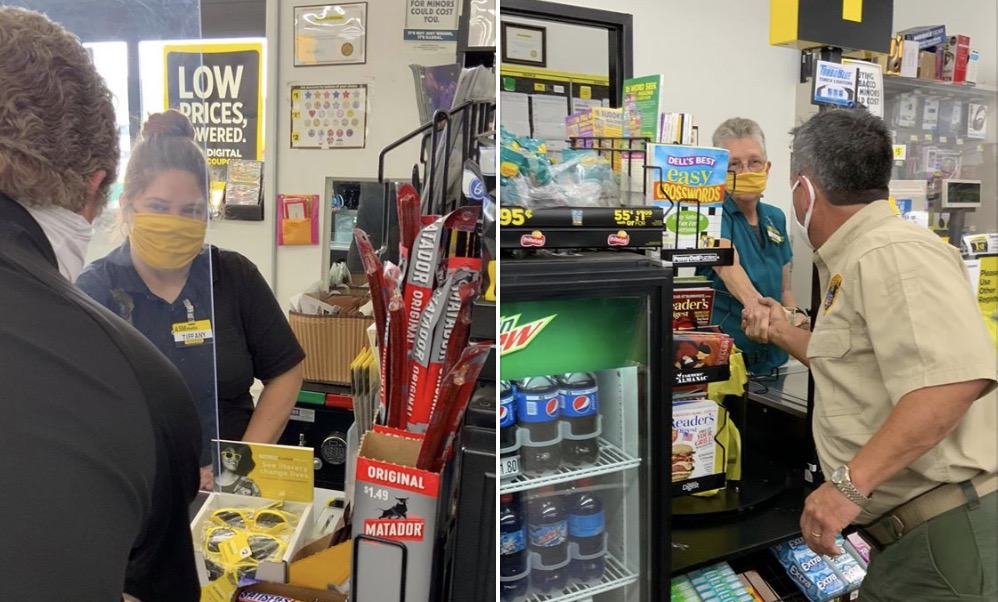 Dollar General Store employees spot murder suspect in store, get their customers out, and lock him in

Two Louisiana Dollar General Store employees are being hailed as heroes after they recognized a murder and kidnapping suspect and quietly escorted customers out before locking the wanted man in the store.

The Calcasieu Parish Sheriff’s Office issued a “BOLO” (“Be On the Look Out”) for Neil Broussard, 51,  after two teenagers were shot and killed and a third was kidnapped in Westlake early Wednesday morning. Another person — the kidnapped girl’s mother — was wounded in the shooting.

Shortly after the BOLO, the Beauregard Parish Sheriff’s Office got a call saying a girl matching the description of the missing teen was seen in Ragley. Deputies and police officers swarmed the area searching for Broussard.

The car Boussard had been driving was located in Ragley, and a witness reported seeing someone matching his description, but deputies weren’t able to put eyes on him, according to The American Press. The search continued throughout the day Wednesday and into the night.

Beauregard Parish Sheriff Mark Herford described the night as “a night full of worry and apprehension about what was going to happen.”

Then, Thursday morning, deputies got a call from Dollar General Store employees Tiffany Cook and Sallye Salter, who said Broussard was locked in their store. “We were so close we got there within seconds and were able to apprehend him without any incidents,” Calcasieu Parish Sheriff Tony Mancuso told the American Press.

“They both exemplified great character in a high pressure situation,” Herford said.

After a news conference announcing the arrest, Herford and Mancuso went to the store to personally thank Cook and Salter.

Broussard, a registered sex offender convicted of molestation of a juvenile in 2005 and 2011, was charged with two counts of first-degree murder, attempted first-degree murder, and second-degree kidnapping. On Thursday afternoon, Judge Sharon Wilson set bond at $4 million. At the time of the shootings and kidnapping, Broussard was wanted for first degree rape and molestation of a juvenile. Another $2 million bond goes with those charges.

Police identified the victims as Kyla Hidalgo, 17, and Kaleb T. Carlton, 18, who were found dead in a Westlake home. Catherine Hidalgo, 40, was seriously wounded but able to identify Broussard as the shooter. She told police that Broussard stole her car and took her 14-year-old daughter with him when he fled.

Calcasieu officials said Thursday that Broussard’s wife, Tori L. Broussard, 41, was arrested Wednesday night and on counts of accessory after the fact to first-degree rape and accessory after the fact to molestation of a juvenile, KPLC reported. She is the chief investigator at the Calcasieu Public Defenders Office. Harry Fontenot, head of the office, told KPLC she had been placed on administrative leave pending further review.