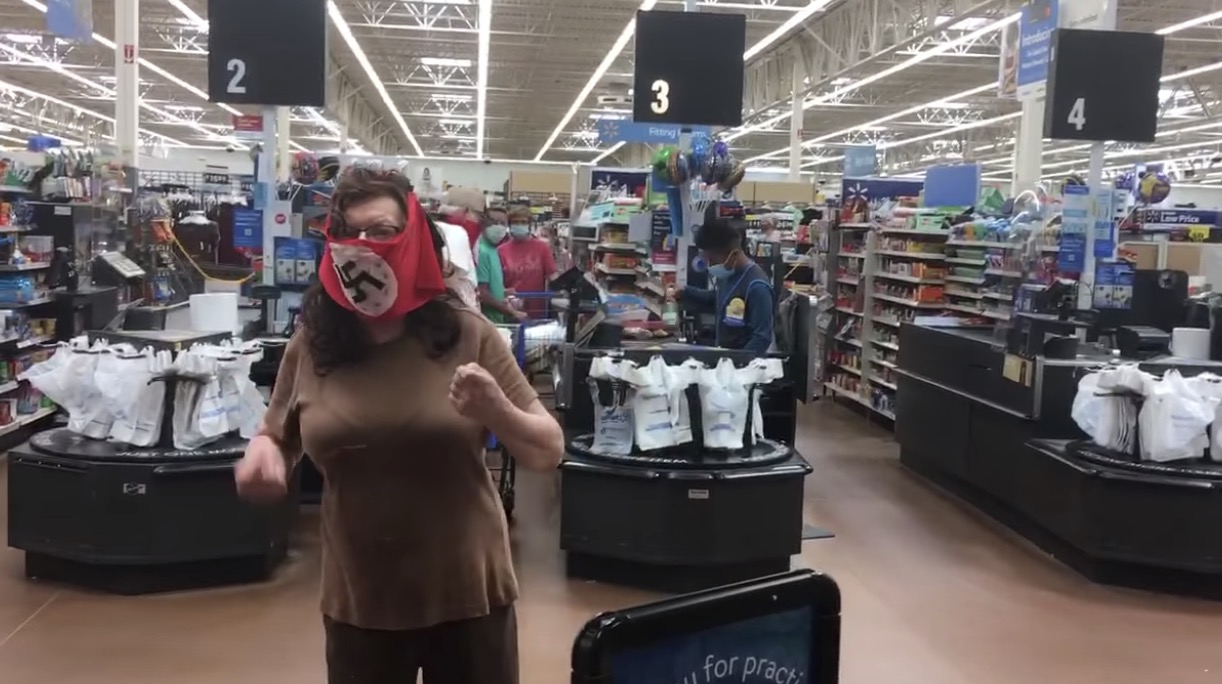 SEE IT: Couple banned from Walmart for wearing Nazi flag instead of facemask

Walmart banned a Minnesota couple from all its stores Saturday when they wore Nazi flags over their faces in protest of the store’s and state’s requirement to wear a mask in public places to prevent the spread of COVID-19.

Saturday was the first day the state’s policy went into effect; Walmart’s requirement for masks began on Monday, according to Fox 9.

The ban will be in effect for at least a year. Police issued a trespass warning to the couple, saying they would be arrested if they violated it.

Walmart issued a statement saying the couple’s actions were “unacceptable.”

“We strive to provide a safe and comfortable shopping environment for all our customers and will not tolerate any form of discrimination or harassment in any aspect of our business. We are asking everyone to wear face coverings when they enter our stores for their safety, and the safety of others and it’s unfortunate that some individuals have taken this pandemic as an opportunity to create a distressing situation for customers and associates in our store.”

A video of the incident shows the woman wearing a brown shirt and making rude gestures as the pair go through the check-out line. The man is wearing a t-shirt that says “True to the Red White and Blue.”

The woman says she isn’t a Nazi and that she’s wearing the swastika flag over her face to protest socialism.

Although “Nazi” is short for the “National Socialist German Workers’ Party,” the German party was not socialist and in fact banned all other political parties and arrested leaders of the Communist Party and Social Democratic Party, imprisoning them in concentration camps. There was a socialist element in the beginning of the party’s history in the early 1920s, but that element was stomped out by the late 1920s in favor of fascism, racism, and anti-Semitism.

Raphaela Mueller, who posted the video of the couple, wrote that she was originally from Germany and “grew up hearing about my great-grandmother who fought in the underground against the first wave of Nazis in the 1930s and 40s.”

“Let me make this abundantly clear once and for all,” she wrote. “The swastika is a hate symbol and you do not fly the flag, you do not wear the symbol anywhere on your body, you do not use or defend this symbol, ever. End of story.”