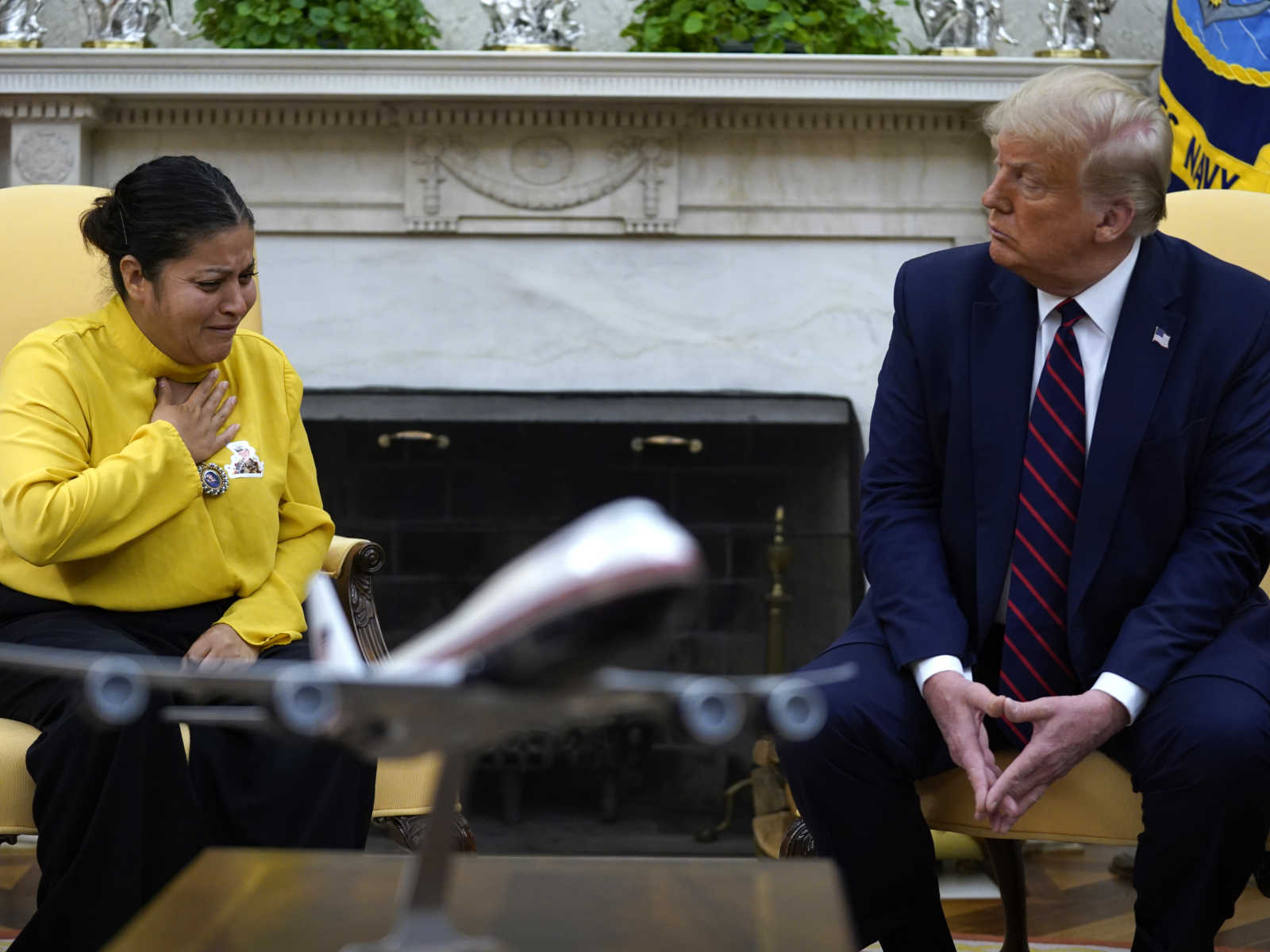 While hosting the family of Vanessa Guillen at the Oval Office on Thursday, President Donald Trump offered to pay for the slain Fort Hood soldier’s funeral expenses.

ABC Houston reports that Guillen’s family, including her mother, two sisters, and others, met with Trump to express their frustration with military officials at Fort Hood, who are accused of keeping them in the dark about Guillen’s disappearance and ultimately, not doing enough after Guillen was found bludgeoned and dismembered.

“She wants to know who’s really responsible,” an interpreter for Guillen’s mother, Gloria Guillen, told Trump on Thursday. “Her daughter died. Her daughter died in service of her country at the hand of people who are in the military.”

Guillen’s teen sister, Lupe Guillen, who has been vocal about the incident since her sister disappeared, said prior to the meeting that she intended to push for answers on how to stop the killings at Fort Hood.

Lupe Guillen pleaded with the President to make a change for the better, a change that helps other soldiers feel safe coming forward if they’ve been sexually harassed.

Trump said the news of Guillen’s death “hit me very hard,” prompting him to push for the FBI and Department of Justice involvement.

“As you know, the FBI and the DOJ are now involved. We got them involved. And people at Fort Hood, where it took place, are very much involved. We didn’t want to have this swept under the rug, which could happen.”

The Guillen family added that they are still waiting for the return of her remains. Trump said he would expedite the process, then offered to pay for Guillen’s funeral.

“I don’t even know if you need help, maybe you don’t need help from a financial standpoint. I have no idea. I just think it’s a horrific thing that happened and if you did need help, I’ll be there to help you,” Trump said.

What Happened to Vanessa?

As CrimeOnline previously reported, Guillen was last seen alive on April 22 at around 1 p.m. at the Regimental Engineer Squadron Headquarters, 3rd Cavalry Regiment, in Fort Hood, Texas. Guillen left behind her car keys, barracks room key, identification card, and wallet in the Arms room, where she worked.

Someone called Guillen in to work on her day off, but it was not soldier Aaron Robinson, the man accused of killing her.

A witness saw Guillen on April 22 as she walked to an adjacent arms room, where Robinson was working. She never came out of the room. According to the Guillen family lawyer, Natalie Kwaham, blood was left all over the room after Robinson bludgeoned Vanessa Guillen to death.

Robinson hid Guillen’s body in a Pelican case, stored it to the side of the armory room, then left the base to buy supplies, Kwaham previously told CrimeOnline. He returned that evening and took the case to the Leon River area, around 12 miles from the base.

Robinson later determined that he couldn’t dispose of Guillen himself and in turn, contacted his girlfriend, Cecily Aguilar, and asked her to help. Both Robinson and Aguilar drove to Leon River, then allegedly used a machete to hack Guillen’s body apart.

On April 26, the suspects returned to Leon River wearing hairnets and gloves. They used cement to encase Guillen’s body parts and lime and rocks to get rid of the evidence. They buried the hairnets and gloves at the crime scene, then drove home and burned the clothes they were wearing that day.

“Vanessa’s sister Mayra was arriving at the base; while was looking for her sister, they were dismembering her body,” Kwaham said during a previous “Crime Stories with Nancy Grace” episode.

After leaving the scene, the suspects allegedly threw the machete, hammer, and Guillen’s cellphone from a car window.

Although two witnesses saw Robinson leaving the base on April 22 with a Pelican case, no warrants were taken out until after investigators found the remains. When authorities pursued Robinson earlier this month, he shot himself in the head. He died at the scene.

Aguilar is now behind bars facing federal counts of tampering with evidence.

Officials told Kwaham that Guillen’s face had been bludgeoned so badly that officials could barely use dental records since her teeth were smashed in during the gruesome attack.

Trump said he intended to “get to the bottom of it” and promised to be in the touch with Guillen family “constantly.”