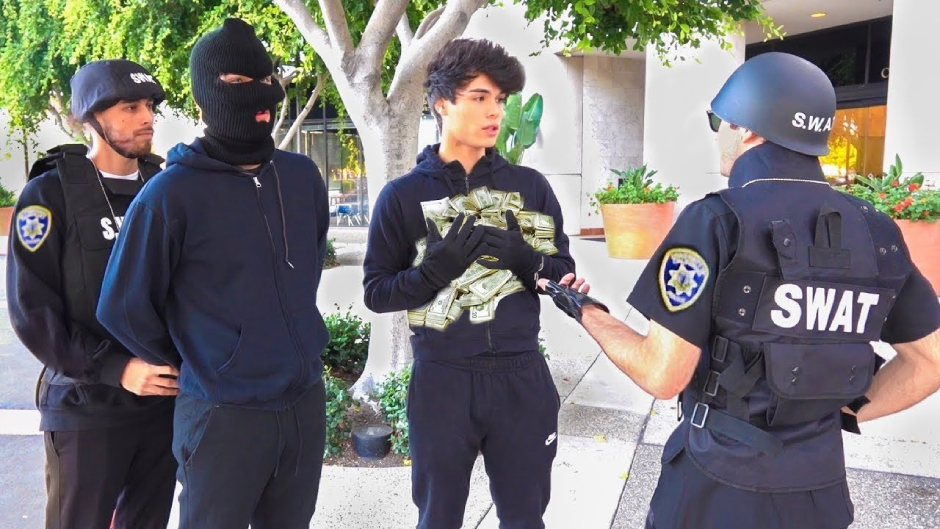 The Orange County District Attorney’s Office said in a statement that Alan and Alex Stokes, 23, are charged with false imprisonment effected by violence, menace, fraud, or deceit and falsely reporting an emergency in connection with two pranks they committed in Irvine hours apart.

On October 15, 2019, the Stokes brothers allegedly dressed in all black, wore ski masks, and hauled duffel bags full of cash to appear as if they had just robbed a bank.

“They ordered an Uber and when they got in the vehicle the Uber driver, who was unaware of the prank, refused to drive them. A bystander witnessed this, believing the two men had just robbed a bank and were attempting to carjack the Uber driver,” prosecutors alleged.

Police who responded to the scene reportedly ordered the unsuspecting Uber driver out of his car at gunpoint. The driver was released after officers ascertained he wasn’t involved in the filmed prank. Meanwhile, police issued the Stokes brothers a warning and let them go.

Four hours later, the pair allegedly carried out a similar prank at the University of California, Irvine. Prosecutors said Irvine police once again received emergency calls about a bank robbery.

Alex and Alan Stokes run a YouTube channel called the Stokes Twins, which has 4 million subscribers. The brothers also have more than 25 million followers on TikTok.

The Stokes brothers reportedly posted a video depicting the incidents — entitled “BANK ROBBER PRANK! (gone wrong)” — to their YouTube page on October 20. People reported that their encounter with the Uber driver was shown in the video.

During the video, the brothers reportedly run into the Uber and tell the driver, “Our getaway driver just bailed on us.” The Uber driver tells the brothers that what they’re doing “isn’t funny” and orders them out of his car.

Later in the video, the Stokes brothers are seen recounting the incident to a group of UC Irvine students.

“We’ve had the police called on us like all day,” one of the brothers said, according to People.

“One minute later, there were like 10 cop cars that pulled out like guns on him. They were like rifles. They thought he was the getaway driver, so they had like 15 guns — he’s like, ‘I’m not even a part of this.’…Yeah, poor guy.”

The prank video reportedly garnered 1 million views on YouTube before it was made private.

“Law enforcement officers are sworn to protect the public and when someone calls 911 to report an active bank robbery they are going to respond to protect lives,” Orange County District Attorney Todd Spitzer commented.

“Instead, what they found was some kind of twisted attempt to gain more popularity on the internet by unnecessarily putting members of the public and police officers in danger.”