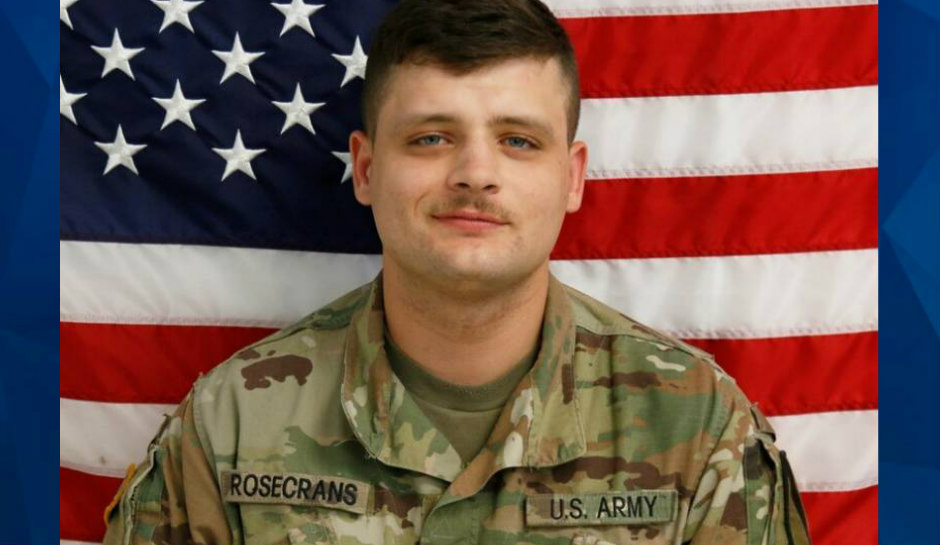 A murder suspect was arrested Thursday in connection with the death of Fort Hood soldier, Brandon Scott Rosecrans, who was found shot to death earlier this year.

As CrimeOnline previously reported, authorities found the body of Rosecrans, 27, one the side of a road in Harker Heights on May 18. According to the Harker Heights Police Department, Rosencrans was found beside his orange Jeep Renegade, which had been set on fire. He had four gunshot wounds to his head and neck, with one gunshot exit wound.

The suspect, identified as 28-year-old Brandon Michael Olivares, was traveling with Rosecrans in his Jeep when, according to police, he shot the victim. Rosecrans was then removed from his Jeep and left for dead off of the 2100 block of Fuller Lane.

According to a newly-released arrest affidavit, Olivares tried to blame another person for Rosecrans’ death. The suspect said a man named Jai Smith killed Rosecrans as they drove back from San Antonio, “where they had bought illegal drugs.”

Further, investigators found what they believe to be Rosecrans’ Jeep keys in a firepit at Olivares’ residence.

Rosecrans enlisted in 2018. He had most recently worked as a chemical equipment repairer and a quartermaster with the 3rd Armored Brigade Combat Team, 1st Cavalry Division.

A motive for Rosecrans’ death is currently unknown.

As CrimeOnline previously reported, Rosecrans is one of five Fort Hood soldiers to die within the past three months. His death is preceded by the murder of soldier Vanessa Guillen, who was found buried in three shallow graves near the Leon River on June 30, around 25 miles from Fort Hood. Her body was dismembered and charred.

Suspect Cecily Aguilar is currently behind bars in connection with Guillen’s death. Another suspect in Guillen’s death, Fort Hood soldier, Aaron Robinson, shot himself in the head while being pursued by police, after learning authorities had discovered her remains.

On June 19, Fort Hood soldier Gregory Morales was found dead in a field in Killeen, Texas, less than 10 miles from Fort Hood. His clothing was found shredded and scattered around the area. No suspects have yet been named in connection with Morales’ death, but authorities said foul play was involved.

On July 21, 26-year-old Pvt. Mejhor Morta was found dead, also at Stillhouse Hollow Lake. A preliminary autopsy indicated that Morta may have drowned, the sheriff’s department said in a news release. The investigation, however, is ongoing. On August 2, Spc. Francisco Gilberto Hernandezvargas, 24, of New York, died Sunday during a boating incident at the Stillhouse Hollow Lake. Witnesses reportedly said the victim went underwater while on an innertube and never came back up.

Investigators believe Hernandezvargas’ death to be a boating accident, ABC 13 reports. Detectives are currently investigating the events that unfolded over the weekend that led to the soldier’s death.

Earlier this week, Army Secretary Ryan D. McCarthy visited Fort Hood for two days after the violent crimes that have occurred near the post. According to ABC News, McCarthy promised to make changes at the base after learning of Guillen’s brutal murder.

“The numbers are high here,” McCarthy said. “They are the highest, in most cases, for sexual assault and harassment and murders for our entire formation — the U.S. Army.”

“I’m angry, I’m frustrated, I’m disappointed, we’re heartbroken. Vanessa was our teammate; we let her down, we let her family down, and it hurts…We’re going to do everything we can to prevent these types of things from happening again, to learn from this, and to move on.”