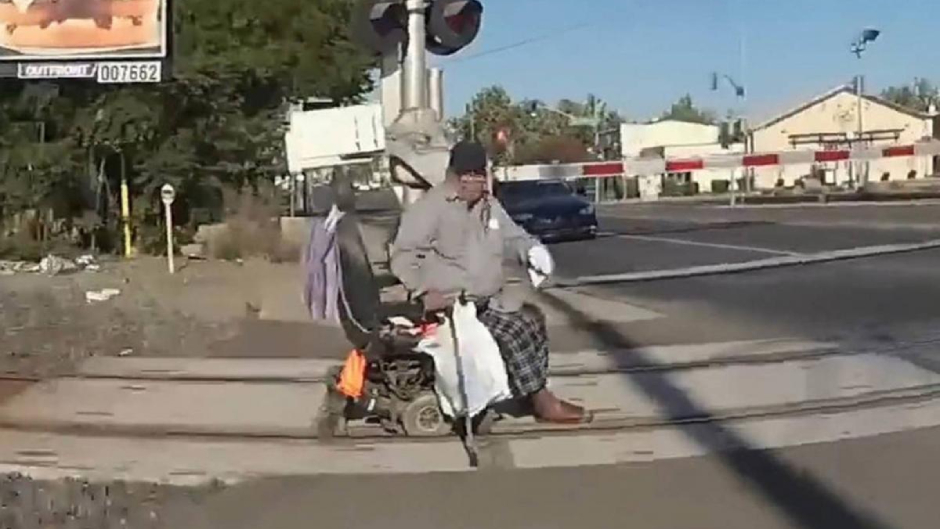 SEE IT: Hero cop risks life to pull man in wheelchair off railroad tracks in nick of time

Cameras caught the moment Wednesday when a California cop saved a man whose wheelchair got stuck in the path of an oncoming train.

Lodi police officer Erika Urrea was reportedly patrolling near Lodi Avenue and Sacramento Street at around 8:44 a.m. when she spotted a 66-year-old man in a wheelchair who was stuck on the Union Pacific Railroad track as the crossing arm lowered to stop traffic. Sergeant Steve Maynard told Lodi News that Urrea couldn’t get the man’s wheelchair loose, so she pulled him out the chair as the train passed through.

Bodycam footage showed the man lying on the ground, inches away from the speeding train. The man suffered severe leg injures when the lead train car struck him as Urrea pulled him to safety, according to Lodi News. He was listed in critical but stable condition.

Urrea and another officer who arrived after the train passed tended to the man’s injured leg until EMS arrived.

“When I fell to the ground and I heard the noise like the train had crashed into something, my initial thought was I didn’t get to him on time,” Urrea told KOVR.

Urrea is reportedly a 14-year veteran of the Lodi Police Department. She said she hasn’t had the chance to speak to the man she saved Wednesday. KCRA reported that the man is expected to survive.

Urrea said, “It’s one of those situations where if one of my family members were stuck or needed help, I would hope that someone would stop and help them and that was just the situation.”