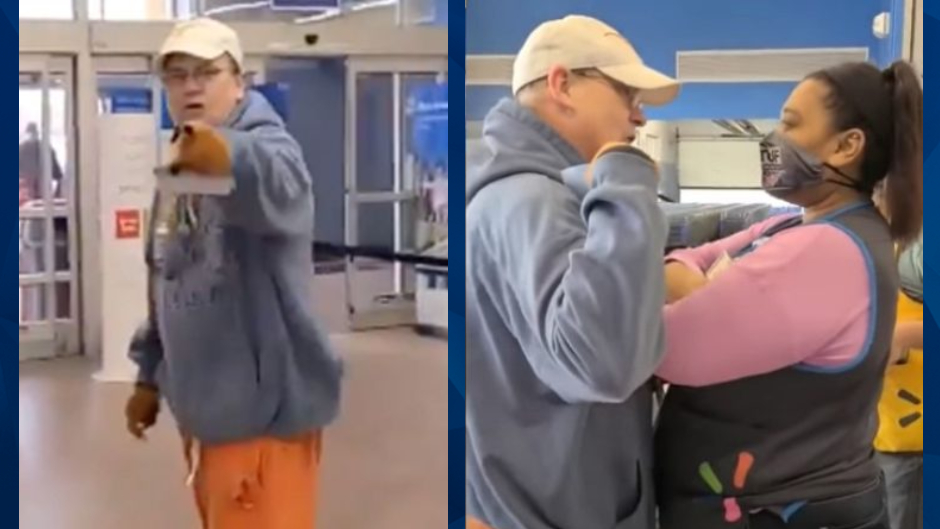 ANGER BOILS OVER AT WALMART: SEE IT! Maskless customer goes after Walmart staff after they tell him to leave

Video posted to social media shows a man berating Walmart staff for kicking him out of the store for not wearing a mask.

McClatchy News reported that the incident occurred Thursday at a Walmart in Anchorage, Alaska. An unidentified man was reportedly filmed walking to the store’s exit while telling employees to “get back on your highway to hell and get out of a godly man’s face.”

Staff is heard telling the man to “have a good day” as he launches into a diatribe about his civil liberties.

“Are you exercising your rights as a private company to take away my rights?” he shouts. “You can say you can refuse service, are you refusing my service?”

Employees were filmed telling the man to stop yelling and to leave. Seconds later, he gets directly in a female worker’s face. Someone off-camera sternly tells the yelling man to stop spitting on the employee.

“Please return to your service of Satan in your ignorant belief you are right,” the man hollers during the two-minute video.

At the end of the video, the man points his finger in a male Walmart employee’s while claiming he threatened him. A female co-worker pulls the employee away from the disgruntled shopper, who ultimately leaves the store.

Authorities have not yet named the man seen in the video.

A Walmart spokesperson told McClatchy News, “It’s unfortunate that this individual chose to express their displeasure in such an inappropriate manner, but we’re proud our associates displayed patience and professionalism as they navigated this challenging situation.”