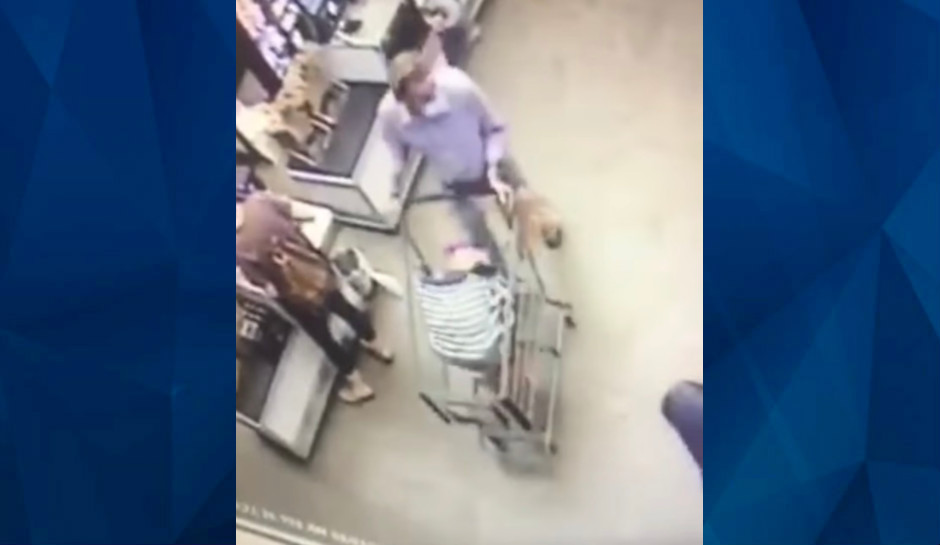 SEE IT: Grocery store customer grabs another customer’s cart WITH HER BABY INSIDE, tries to leave

An Arizona man has been charged with kidnapping after he tried to walk out of a Flagstaff grocery store pushing a cart with another customer’s baby inside, according to Flagstaff police.

Jeffery Roholt, 59, told police he thought the cart was his when he finished paying for his two small bags of groceries at a self-checkout line and turned to leave. The cart, with the infant inside, belonged to the woman at the next checkout station, Flagstaff police said.

She noticed Roholt leaving with her baby and stopped him.

Roholt left the store after the incident, at about 9:30 a.m. on Thursday, and the mother called police.

**UPDATE**We have identified the individual depicted in the video and photographs. This investigation is on-going and rapidly evolving. We will provide updates as more information becomes available.___________________________________________________________Attempted Child Abduction (P20-12664)Flagstaff, Ariz. – On September 3, 2020 at approximately 9:35 a.m., Flagstaff Police responded to the Basha’s grocery store, 2700 S. Woodlands Village Blvd., regarding an attempted infant kidnapping report.A mother was purchasing groceries using a self check-out line while her infant remained in the grocery cart. A male completed his purchase of groceries using an adjacent self check-out and took control of the mother’s shopping cart. The male attempted to leave the store with the infant and shopping cart. The mother quickly noticed the male leaving with her infant and stopped the male, preventing her child from being abducted.The male is described as Caucasian, standing approximately 5’ 10” and weighing approximately 160 pounds. He has brown hair and was wearing slacks and a collared shirt at the time of the attempted kidnapping. The investigation is on-going and has been assigned to the Criminal Investigations Unit. We are seeking the public’s assistance in identifying the suspect involved in this attempted kidnapping.If anyone recognizes the male depicted in the attached photographs, please contact the Flagstaff Police Department at (928) 774-1414 or you may remain anonymous and provide information by calling Silent Witness at (928) 774-6111. ###

Police viewed video from a nearby Walmart store showing the parking lot and identified a suspect vehicle, eventually identifying the suspect as Roholt.