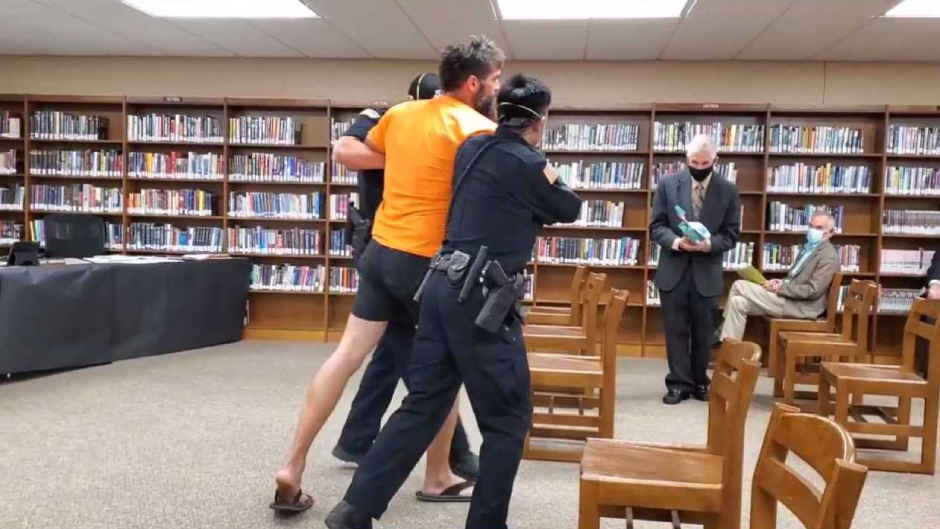 SEE IT: Cops drag anti-masker out of school board meeting for refusing to wear mask

Police in South Dakota reportedly hauled a man out of a school board meeting Monday because he refused to wear a mask.

According to the Mitchell Republic, roughly 20 people attended the Mitchell Board of Education meeting, which was held in Mitchell High School’s library. Reed Bender, who reportedly sat in the front row, declined to wear a mask — despite Board of Education President Deb Olson saying at the beginning of the meeting that mask would be provided for attendees who did not have one.

Mitchell Police officers removed Reed Bender after he refused to wear a face mask at the Mitchell School Board meeting. School district policy requires masks be worn in school buildings. He was escorted out of the building. No arrest was made.

Bender is reportedly a staunch mask opponent who has spoken out against mask mandates during previous board meetings.

According to the news outlet, Mitchell School District Superintendent Joe Graves told Bender that he would be taken off the premises if he did not abide by the mask requirement. Bender allegedly said he would make arrangements to be in compliance for the next meeting.

Graves eventually called the Mitchell Police Division, who arrived at the high school about 20 minutes later.

In a video KORN news director J.P. Skelly posted to Facebook, Bender is heard telling officers that he knows they don’t want to forcibly remove him from the school board meeting. One of the officers then warns Bender that he may be criminally charged if he does not leave.

“I get it…You’re gonna have to drag me out,” Bender says moments before officers do just that.

Bystanders can be overheard saying how the ordeal is an “embarrassment” and urging Bender to not resist and comply with police.

An officer pulls out his Taser during the scuffle but never uses it on Bender. After Bender is removed from the library, at least two attendees admonish the school board for getting the police involved.

“This is a joke,” someone says.

Mitchell police Seargent Sawyer Gibson told the Republic that Bender was escorted off the property but was not arrested. While no charges have been filed, Gibson said the incident remains under investigation.