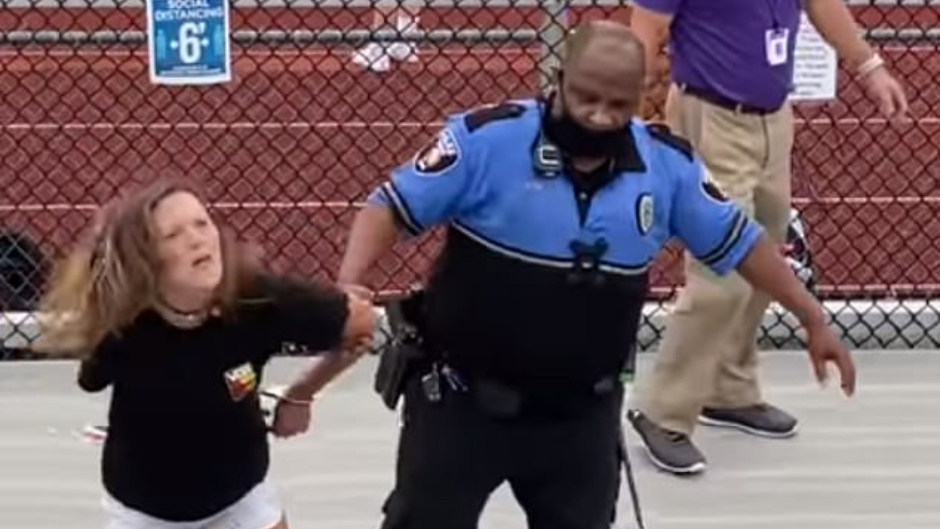 An Ohio police officer reportedly tased and arrested a woman at a middle school football game Wednesday for refusing to wear a mask.

A video posted to YouTube apparently shows a Logan police officer arrest Alecia Kitts after some unintelligible words are exchanged. A school official told The Marietta Times that before police got involved, a junior high school assistant principal asked Kitts to wear her mask, which is seen in her back pocket during the incident.

In the video, a mask-less Kitts is seen sitting on bleachers next to three children and her mother. She tells the cop, “Don’t touch me,” as she tries to free her hands from his grip. The three children flee the area as the scuffle grows more aggressive.

One of the children can be heard crying as Kitts continues to fight the officer and demand he let go of her. At some point, a man who appears to be a school official approaches Kitts and the officer to see what is going on.

Moments later, the officer tases Kitts, causing her to fall onto a lower row of bleachers. The officer then handcuffs Kitts and takes her into custody.

Logan Athletic Director Theresa Schultheiss told The Marietta Times that 300 people attended Wednesday’s football game at the middle school and only Kitts and her mother had issues with the mask mandate.

Kitts was charged with criminal trespassing