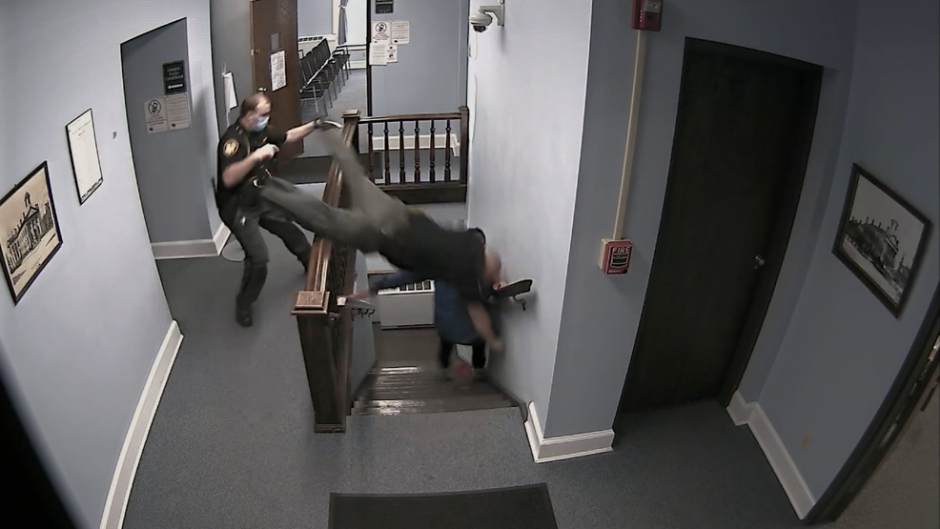 Authorities in Ohio are looking for a man who allegedly fled a courthouse Tuesday while awaiting sentencing for drug charges.

Nickolaus Garrison, 34, reportedly escaped from the Highland County Common Pleas Court, where he was sentenced to six months on a charge of aggravated possession of methamphetamine.  Court office administrator Marsha Oyer told The Highland County Press that Garrison took off as officers attempted to take him into custody.

Surveillance footage from inside the courthouse apparently shows Garrison running out of a courtroom and down a flight of steps as at least one court bailiff and deputy follows.

Deputy Ben Reno was filmed chasing Garrison before toppling over the railing and falling down the flight of steps headfirst. KPRC reported that Reno was hospitalized with a concussion and broken ribs.

Reno is reportedly recovering at home. Garrison, who lives in Hillsboro, remains on the loose as of Thursday afternoon.

Anyone with information regarding Garrison’s whereabouts is asked to contact the Highland County Sheriff’s Office at 937-393-1421 or the Hillsboro Police Department at 937-393-3411.