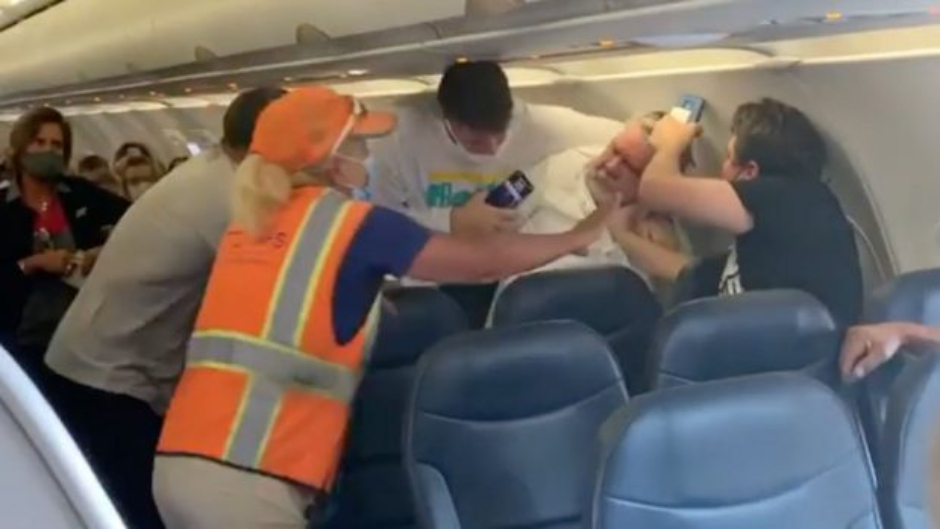 SEE IT: Mask dispute leads passengers to pummel each other on flight [Report]

A video posted to Instagram appears to show two passengers aboard a Utah-bound flight fight each other during a dispute over maks.

KSL reported that the altercation occurred Saturday on an Allegiant Air flight from Mesa Arizona, to Provo, Utah. Rylie Lansford, who filmed the ordeal, said the brawl stemmed from a man who argued with flight attendants about wearing a mask. Lansford claimed she was sitting near the arguing passengers but moved when the first punch was thrown.

“At first, I thought it was banter between friends cause it was kind of weird, but then you quickly learned that the words that they were saying to each other were not friendly,” she said.

In the video, a man wearing black is seen holding an older maskless man by his neck as he punches him in the head. Staff and other passengers are seen restraining the older man as the other man — whose mask is nestled under his nose and mouth — continues the assault.

This happened on my flight earlier today. Allegiant flight from Mesa-Phoenix to Provo, UT. I will be posting the story and what happened next!

Lansford told KSL that the older man boarded the plane wearing a face shield, but a flight attendant told him he would have to wear a mask that covered his nose and mouth.

The news outlet reported that the maskless passenger was escorted off the flight while the other man was allowed to stay. Allegiant Airlines have not yet commented on Saturday’s incident.