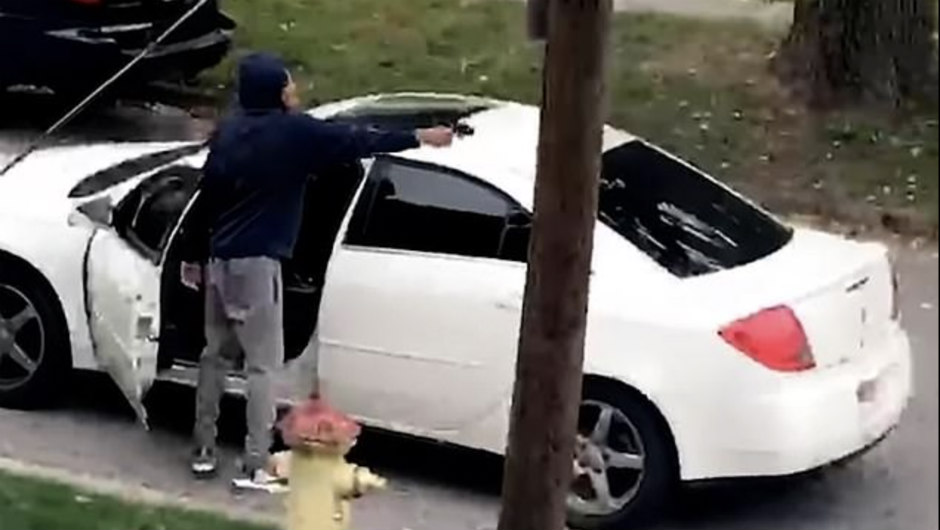 See it: Man speeding through Ohio neighborhood shoot at kids who tell him to slow down!

A man allegedly opened fire on kids playing basketball in Ohio after they asked him to slow down while driving on their street, Fox 8 reports.

Now police in Akron, Ohio, are searching for that man and are asking for the public’s help in bringing him to justice.

A white Pontiac G6 reportedly sped down a street where the kids were playing basketball. When a 15-year-old boy yelled at the driver to slow down, the driver stopped, got out, showed a handgun, and fired multiple shots at the children.

The driver then got back in the car, which had tinted windows and temporary tags, and sped away.

The bullets did not hit the teens and they were not physically injured during the shooting, according to the television station.

A resident who lives in the area recorded the incident on camera and shared the video with police and WJW-TV.

Markeise Smith, 15, one of the teens playing basketball, told the television station that when he saw the man’s gun he and a younger neighbor began running to a nearby backyard.

“He reached in the car for something and that’s when I found out he had a gun. He put it under his arm, trying to hide it from me. He put it under his arm, holding the gun, and then I started walking away, thinking that it’s time for me to hide from the gun, until he started shooting. That’s when I started running after him (11-year old neighbor) to tell him to go into the house and I ran into the backyard, and I told my mom to come to the backdoor.”

To report information about the case, call the Akron Police Department Detective Bureau at 330-375-2490 or 330-375-2TIP. Anonymous tips are accepted.