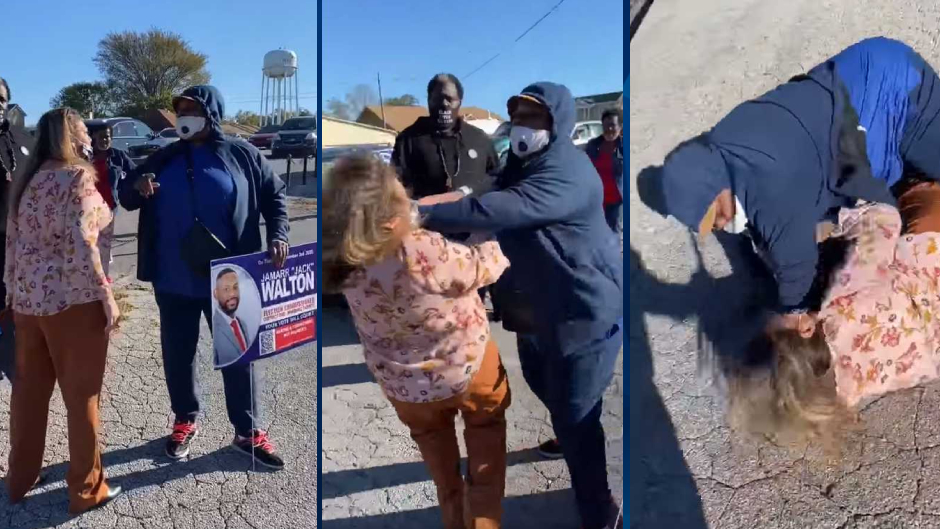 A video posted to social media appears to show an election commissioner in Mississippi fight with a supporter of her opponent on Election Day.

According to the Mississippi Clarion-Ledger, Sheri McClatchy and Pearlie Howell are facing simple assault charges for a filmed altercation that unfolded across the street from a polling precinct in Holly Springs.

This is voters suppression at it best!!!!

In a video posted to Facebook, McClatchy is seen confronting Howell when Howell says she “just woke up” and tells McClatchy to get back in her truck.

The video does not show the entire disagreement, but Holly Springs assistant police Chief Darryl Bowens told the Clarion-Ledger that Howell claimed McClatchy parked her truck in a nearby funeral home’s parking lot and was blocking the driveway.

During the exchange, Howell is heard threatening to smack McClatchy if she stays in her face. Howell then points her finger at McClatchy, who pushes her hand away.

“Get out of my face, lady,” Howell says before poking McClatchy’s face.

McClatchy is seen getting closer to Howell, who responds by punching McClatchy in the face. The two women tussle on the ground before the cameraman pulls Howell off of McClatchy.

While running to her truck, McClatchy tells the cameraman that she’s pressing charges. Both women said they are filing charges against one another, according to Bowens.

Rob Shabazz, who also filmed the incident while campaigning for McClatchy, told the Clarion-Ledger that the situation turned physical after McClatchy asked a question.

However, in the video posted to Facebook, the cameraperson can be heard telling someone who appears to be a poll worker that McClatchy had gotten into Howell’s face.

Holly Springs Assistant Police Chief Darryl Bowens told the Clarion-Ledger that both women were issued citations, but their court dates are pending.

Local reports from June 2019 indicated that McClatchy was filmed fighting a customer at a Holly Springs laundromat where she worked. McClatchy told WREG that the fight occurred after she told two other women not to overload the washing machines.

McClatchy reportedly pulled her gun on the disgruntled customer after the brawl spilled outside. It is unclear whether criminal charges were filed in that incident.