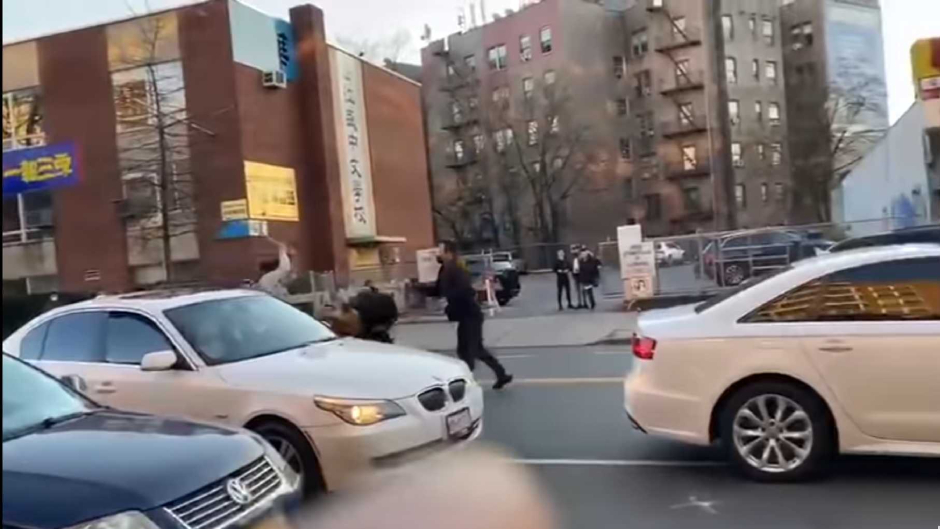 Four people were injured on Monday when a road rage altercation escalated to the point that one of the drivers plowed into a bakery, according to reports.

The NYPD told Gothamist that the incident unfolded in Queens. Video provided to the news outlet appears to show four men fighting amid a dispute over a parking spot.

The New York Daily News reported that driver Jie Zou, 24, was filmed fighting with a rival driver before Zou’s bat-wielding passenger, Jonathan Zhang, 35, intervenes and hits a man defending the other driver.

The other driver takes the bat from Zhang and uses it to hit Zou’s car as Zou appears to drive off. Zou then does a u-turn and tries to mow down the man — only to plow into a storefront in the process.

Gothamist reported that the business damaged during the ordeal, Rainbow Bakery, was celebrating its grand opening on Monday. The bakery’s owner told WCBS that an employee was injured by shards of glass when Zou crashed into his storefront.

Three women and a man were reportedly hospitalized with non-life-threatening injuries. The Daily News reported that the driver of the other vehicle suffered injuries to his leg and arm.