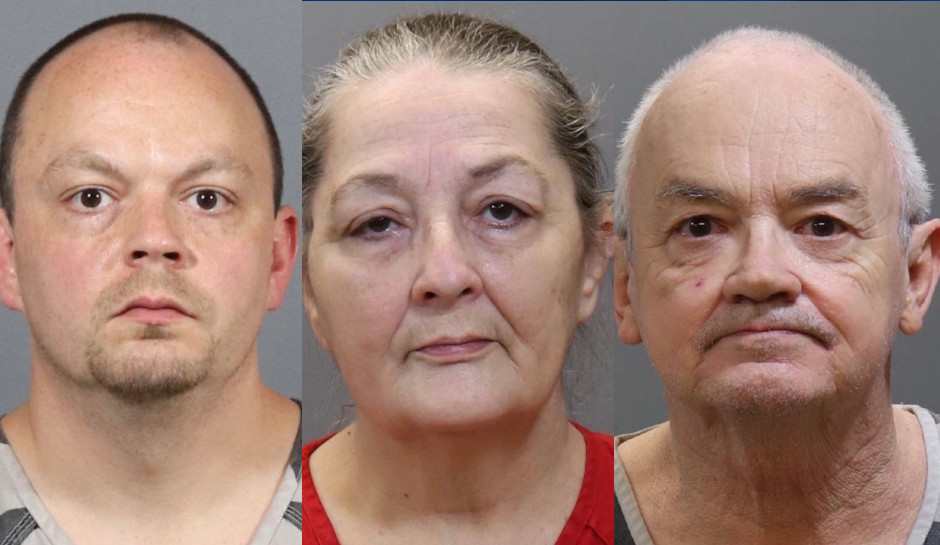 A Tennessee woman and her adult son accused of abusing the woman’s adopted children and killing two of them appeared in a Knox County court Friday for the first time, where a judge refused to lower Michael Gray Jr’s bond, WBIR reported.

Gray Jr, 40, his mother Shirley Gray, 60, and his father Michael Gray Sr, 63, were indicted this summer on counts of first-degree murder, felony murder, aggravated child abuse, and other charges. Gray Sr did not appear in court on Friday.

The abuse allegedly took place between 2011 and 2016, when the elder Grays lived in the lower level of Gray Jr’s house in the Halls community of Knox County. Prosecutors say four or five adopted children lived with the parents, and one of the children — named Jonathan — reportedly died from abuse and was buried in the yard in 2015 or 2016, as CrimeOnline previously reported.

Friday’s court appearance was Shirley Gray’s arraignment, which had previously been delayed because she had been in contact with someone who tested positive for the coronavirus. Her son and husband have already been arraigned, according to WBIR.

Criminal Court Judge Scott Green said Gray Jr’s $500,000 bond isn’t unreasonable considering the charges against him and that he was persuaded by the prosecution’s insistence that they have plenty of proof that the son was “directly involved in this,” including witnesses who will testify that he was aware of that children were held in cages in the basement and did nothing to stop the abuse. Two of the other children have implicated him as well.

Gray Jr’s attorney said that his client is innocent, however, putting all the blame on the parents. “I’m not adjusting the bond today,” Green said, adding that he might consider it later on.

The family is due back in court in Knox County on February 4, 2021.

Gray Sr and Shirley Gray also face murder and abuse charges in neighboring Roane County, where they moved after leaving their son’s home in 2016. The following year a girl named Sophie, about 11, died, and Gray Sr admitted burying her body on the property. Prosecutors in Roane County say Sophie was murdered and that the other adopted children were continually abused.

Authorities zeroed-in on the Grays in May, after someone called 911 about their 10-year-old son walking alone in the street in Roane County, about 55 miles west of Knox County. Officers eventually made contact with the couple, who allegedly claimed they didn’t realize he had left home.

The 10-year-old boy reportedly told the Department of Children’s Services investigators that another boy, a 15-year-old, was in the basement. The 10-year-old also revealed that a deceased child, an 11-year-old girl, was buried in the backyard of their home, according to reports.

Gray Sr also reportedly admitted that the 15-year-old was imprisoned in the basement, and investigators learned he’d been there since 2016.

Investigators believe the 15-year-old had no contact with the outside world since 2016 as punishment for stealing food. Along with the teen, the couple allegedly fed their 11-year-old daughter only bread and water in the months preceding her death. The girl’s remains were reportedly buried near a pole barn on the property. Her cause of death is not yet known.

The 15-year-old kept in the basement told authorities that a brother had become ill before disappearing from the residence. He also claimed his parents said his brother had moved in with another family, according to WATE.

The Knoxville News Sentinel reported that the three surviving children, two boys and a girl, are in the custody of the Tennessee Department of Children’s Services. Deputies wrote that the children “appear to be stunted in growth” and had not received medical attention in at least six years.

“(Two of the children) appear to have no formal education,” according to the warrants, “and were, in fact, amazed by what a refrigerator does when they observed one in their foster home.”

Gray Jr is not charged in Roane County. The elder Grays are scheduled to appear in court there on December 18. Attorneys told WBIR that the Roane County trial will take place first, followed by the Knox County trial.