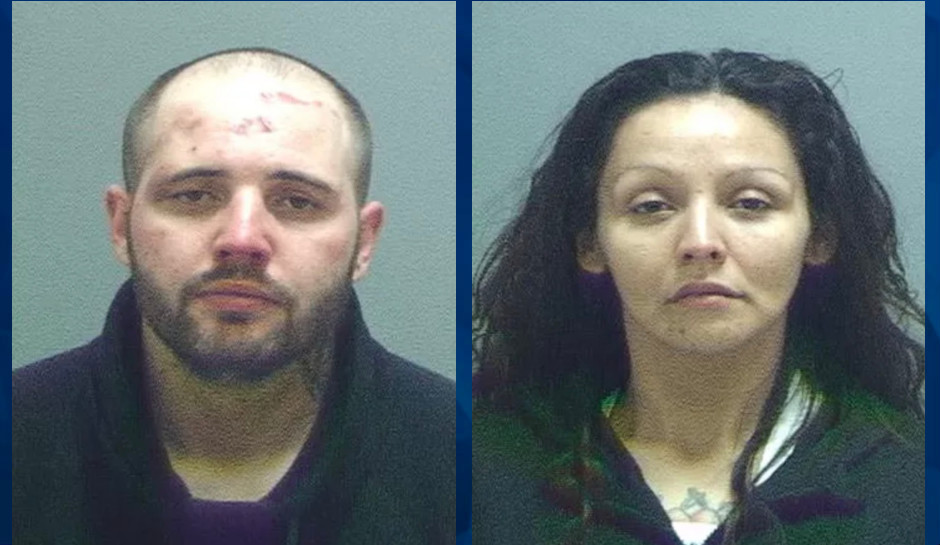 A Utah man was shot with a pellet gun and his wife stabbed early Thursday morning during a home invasion in which one of the perpetrators pointed his gun at a toddler and threatened to shoot him, the Deseret News reports.

Colton Skeet Wilkin-McBride, 27, and Monique Nichole Quintana Briceno, 33, were arrested and charged with numerous counts relating to the break-in.

The homeowner told police that a man and a woman, both wearing ski masks, entered the home in Magna at about 5:30 a.m. and went upstairs. The homeowner confronted Wilkin-McBride, who pointed a gun at him, an affidavit says.

Wilkin-McBride followed when the man ran into the bedroom where his toddler son was.

“The male continued to aim the gun at him and the 2-year-old and kept asking him for the money and keys while going through the closet,” the affidavit says.

The homeowner asked Wilkin-McBride to leave, prompting him to reply, “Do you think this is a joke? I am going to blow your son’s brains out.”

When Wilkin-McBride made a move toward the boy, the homeowner grabbed his gun, and the two struggled. The gun “went off next to the right side of (the homeowner’s) head,” according to the affidavit.

The homeowner’s teenage son entered the room, and the two held Wilkin-McBride down, but he called for Briceno to come help.

Briceno entered the room holding what the homeowner thought was a black Glock and shot him several times. “I thought I was dead,” he said, according to the affidavit. Briceno was carrying a pellet gun, however, and his wounds were not as serious as he feared.

The wife tried to take Briceno’s gun away, leading to a confrontation in the kitchen. There, the affidavit says, Briceno grabbed a kitchen knife and stabbed the wife. Family members fought back, however, and took the knife away.

When police arrived, they saw Briceno, bleeding from the face, attempting to flee in McBride’s car. When they got inside the home, “the residents were holding down a male who had broken into the residence,” according to the affidavit.

The homeowner told police that Wilkin-McBride knew his name but said he’d never seen the suspect before. Wilkin-McBride also said he didn’t want to go back to prison while he was held down, the affidavit says.

The homeowner “sustained several injuries to his back, chest, neck and face requiring medical treatment. His wife received stitches in her arm from a knife wound sustained during the assault. (The homeowner’s) juvenile son received minor injuries while helping to detain Colton,” the document says.