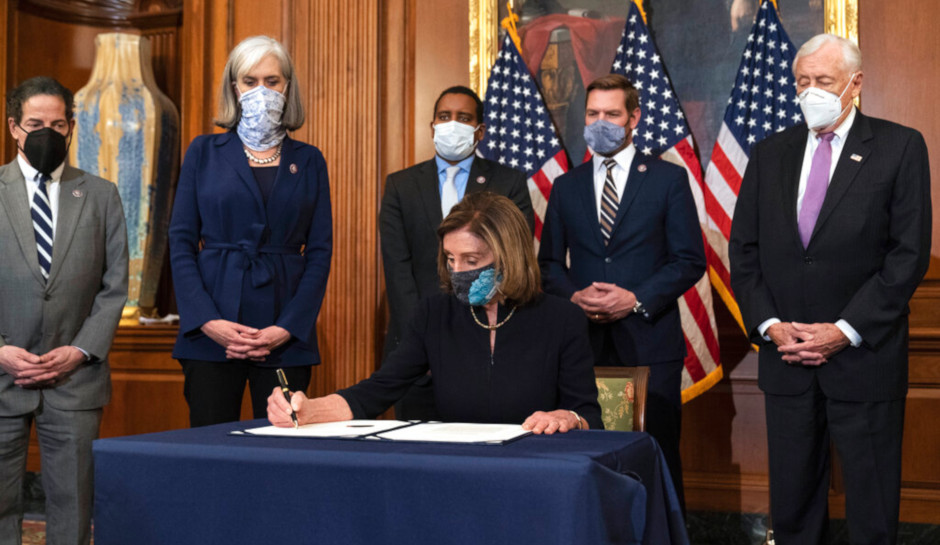 Ten Republicans joined House Democrats on Wednesday to impeach Donald Trump, making him the first president in US history to be impeached twice, the Washington Post reports.

The final vote was 232-197. The next step for impeachment is trial in the Senate, but outgoing Senate Majority Leader Mitch McConnell has said he will not call the Senate back into session before January 19, and soon to be Majority Leader Chuck Schumer said the trial will likely begin after Joe Biden and Kamala Harris are sworn in as president and vice president on January 20.

While some Republicans, including House Minority Leader Kevin McCarthy, argued that Trump bore some responsibility for last week’s deadly riot at the US Capitol, they contended that impeaching him would further inflame passions and divide the country and called for censure.

But House Speaker Nancy Pelosi said censure was not enough. “He must go,” Pelosi said. “He is a clear and present danger to the nation that we all love.”

A majority of Republicans, however, would not agree that Trump had anything at all to do with the riot on Wednesday that left five people, including a Capitol Police officer, dead. Instead, they repeated Trump’s own arguments that impeachment was nothing more than “witch hunt.”

But Rep Liz Cheney — the Wyoming representative who is the No. 3 Republican in the House and daughter of former Vice President Dick Cheney — said Tuesday when she announced that she would vote to impeach that there has “never been a greater betrayal by a President of the United States of his office and his oath to the Constitution.”

As calls from GOP leadership for her to resign rose on Wednesday, Cheney told reporters “I’m not going anywhere.”

“Our nation is facing an unprecedented, since the civil war, constitutional crisis,” she said. “That’s what we need to be focused on. That’s where our efforts and attention need to be.”

The article of impeachment voted on Wednesday contains one charge — that Trump incited an insurrection.

“Donald Trump is a living, breathing, impeachable offense. It is what it is,” Democratic Rep. Hakeem Jeffries of New York said in his floor speech.