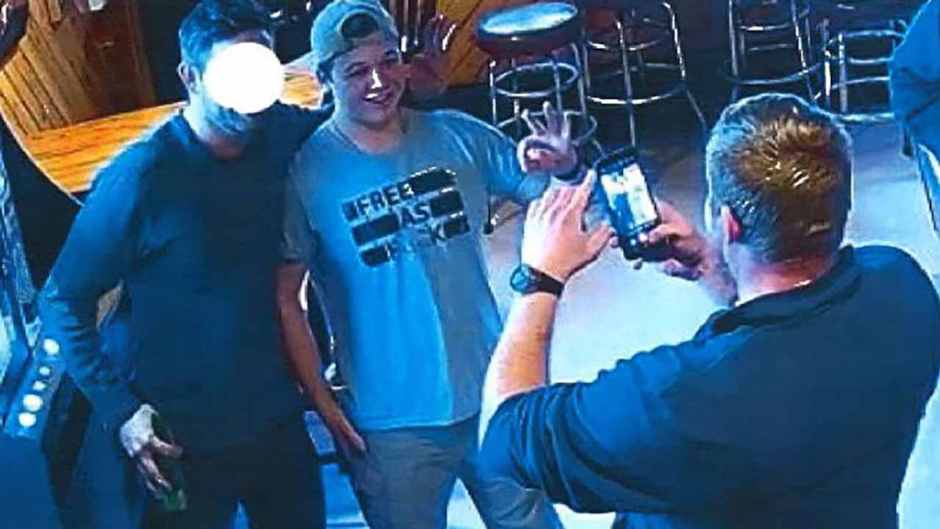 According to WTMJ, Rittenhouse, 18, drank several beers at Pudgy’s Pub in Mount Pleasant and took photos with patrons while flashing the “OK” sign — which Kenosha County prosecutors said is a symbol co-opted by white supremacists. Prosecutors also alleged bargoers sang a “Proud Boys” anthem to Rittenhouse.

Kenosha News acquired pictures that appear to show Rittenhouse wearing a t-shirt that reads “FREE AS F**K” and flashing the sign.

Rittenhouse and his mother reportedly visited the bar on January 5, after he pleaded not guilty in Wisconsin to intentional homicide, attempted homicide, reckless homicide, recklessly endangering safety, and possession of a dangerous weapon by a person under 18.

WTMJ reported that Rittenhouse is not barred from drinking alcohol under the current bond agreement. In Wisconsin, people ages 18 to 20 can legally drink if they are under a parent or guardian’s supervision.

On Wednesday, the Kenosha County District Attorney’s Office asked the court to ban Rittenhouse from having any contact with militia and white supremacist groups, including the Proud Boys. They are also pushing for the teen to be prohibited from drinking or possessing alcohol and going to establishments that serve alcohol, according to the news outlet.

Rittenhouse was 17 when he allegedly used an AR-15 to fatally shoot two protestors and wound a third man at a protest in Kenosha.

Rittenhouse claimed while at the protest, he was hit in the head and neck with a baseball bat and skateboard. While medics reportedly observed superficial scratches on his arm, they did not see any bruising or cuts.

At the time of the deadly August 25 shooting, demonstrators were protesting the officer-related shooting of Jacob Blake.

Kenosha police officer Rusten Sheskey was investigating a domestic incident when he reportedly shot Blake, 29, seven times in the back as Blake opened the driver’s side door to his SUV. The August 23 officer-involved shooting left Blake partially paralyzed, according to reports.

Rittenhouse was arrested in Illinois a day after the shooting and eventually extradited to Wisconsin. He was released from custody in late November after posting a $2 million bond.

The same day Rittenhouse pleaded not guilty to the charges against him, prosecutors announced they would not be criminally charging the officer who shot Blake.

Rittenhouse’s trial is scheduled to begin on March 29.