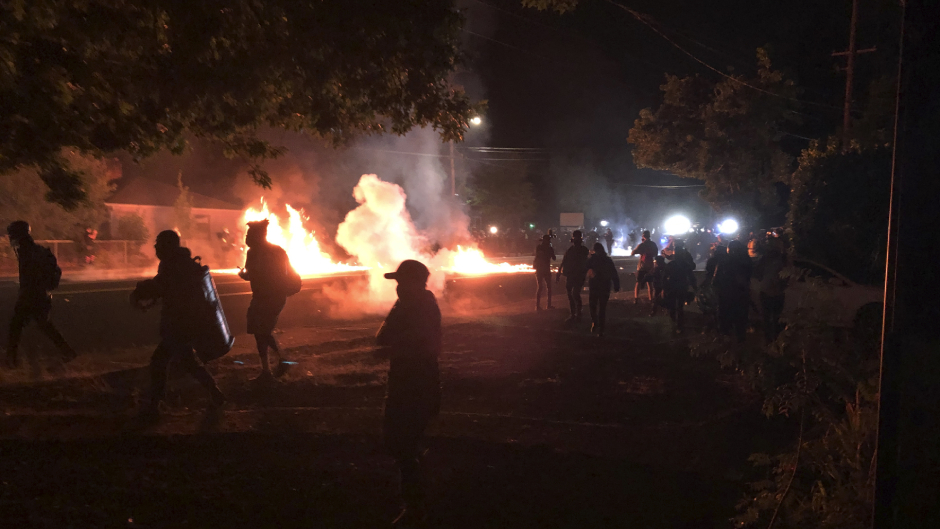 More than a dozen people were arrested in Washington and Oregon amid politically-charged Inauguration Day protests that reportedly involved vandalism and assault.

The Seattle Times reported that about 100 demonstrators took to the streets in downtown Seattle. At one point, protestors outside an ICE office reportedly lit an American flag on fire. Around the same time, someone smashed the windows of a nearby AmazonGo store and tagged the building with, “Amazon uses $ 2 fund tech for ICE.”

KOMO reported that windows were also broken at the William Kenzo Nakamura Courthouse and a Starbucks store in Pike Place Market. The news outlet noted that anti-fascist, or antifa, chants could be heard as demonstrators marched to the Space Needle.

Meanwhile, in Portland, at least eight arrests were made as protestors reportedly stole an officer’s bicycle and threw objects at police. At one point, protestors broke windows at the Democratic Party of Oregon headquarters, according to The Oregonian.

The news outlet reported that protestors denounced the government and Biden Administration while calling for police and education reform. NBC News reported that Breonna Taylor’s name was spraypainted on the Democratic Party headquarters.

While some reports linked the incidents in Portland to antifa, officials have not linked the protestors to any specific political movement.

We avoid categorizing people involved in these events. It’s not our role to put people in ideological boxes. I’ve found that even those gathered for a single event have different motivations and allegiances. We focus on individual actions, specifically those that are criminal in nature. Our role is, wherever possible, to make arrests for crimes committed by individuals, and we have put that information out via press releases.