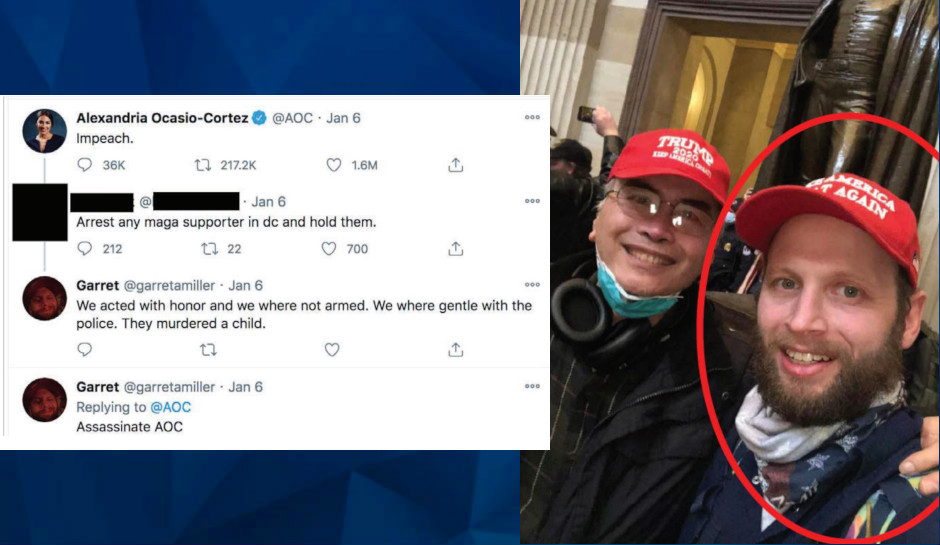 A Texas man arrested for his role in the violent mob attack on the US Capitol on January 6 was charged with making death threats to a US congresswoman and a Capitol police officer when he appeared in court on Friday.

Garret Miller faced the usual charges of entry into a restricted building without authorization, violent entry and disorderly conduct on Capitol grounds, and obstructing an official proceeding — the same or similar charges nearly all participants in the pro-Trump riot have faced so far — when he was arrested on Wednesday, according to the Department of Justice.

But charging documents reveal Miller didn’t stop on January 6, when he responded to a tweet from New York Congresswoman Alexandria Ocasio-Cortez, after the insurrection had failed, with a false claim that police “murdered a child” and  “Assassinate AOC.” Days later, Miller discussed the fatal shooting of Ashli Babbitt as she was trying to break through into the House chamber, saying “We going to get a hold of [the US Capitol Police officer] and hug his neck with a nice rope.”

When challenged by another social media user about his professed Christianity, Miller responded, “Justice … Not murder … Read the commandment … theres a difference.”

Nearly a week later, Miller said on a Facebook chat that the officer who shot Babbitt is “not going to survive long” and that “millions” of people agree that the officer “deserve to die … so its huntin season.”

He described Babbitt, an Air Force veteran who fell into the QAnon conspiracy, as “a sister in battle were bravery achieve victory and she paid the ultimate price. … Dead serious she fought fir me, now I fight fir her.”

“Well we got the traitor cop as a target and as long as we don’t shoot him we don’t get accused of firing the first shot,” Miller wrote. “He shot first. His death prevents civil war by liberal history teller arguments.”

The officer who shot Babbitt has not been identified.

Miller was apparently suspended from Twitter because of the death threats, and later wrote on Facebook he was “happy” about it. Another social media user asked if police knew his name, and he responded, “it might be time for me to …. Be hard to locate.”

On several social media posts made on the day of the riot, Miller claimed that the insurrection was “peaceful” and that the rioters “overwhelmed” police ” but did not injure them.” In fact, one police officer was killed in the violence, and dozens more were hurt, some seriously.

Miller was identified inside the Capitol in several video clips and images — some of which he posted to his social media accounts days after the riot, the court document details.

He also spoke openly about some of his plans for his trip to Washington and appeared to be prepared for violence. “I am about to drive across the country for this trump s***,” he wrote on Facebook on January 2. “On Monday … Some crazy s*** going to happen this week. Dollar might collapse. … civil war could start … not sure what to do in DC.”

The next day, he wrote he was bringing along “a grappling hook and rope and a level 3 vest. Helmets mouth guard and bump cap.”

Miller has a detention hearing on Monday.

[Featured image: Part of Garret Miller’s thread with Rep Alexandria Ocasio-Cortez and a photo he posted to his Facebook page showing him (red circle) with an unknown man/FBI]