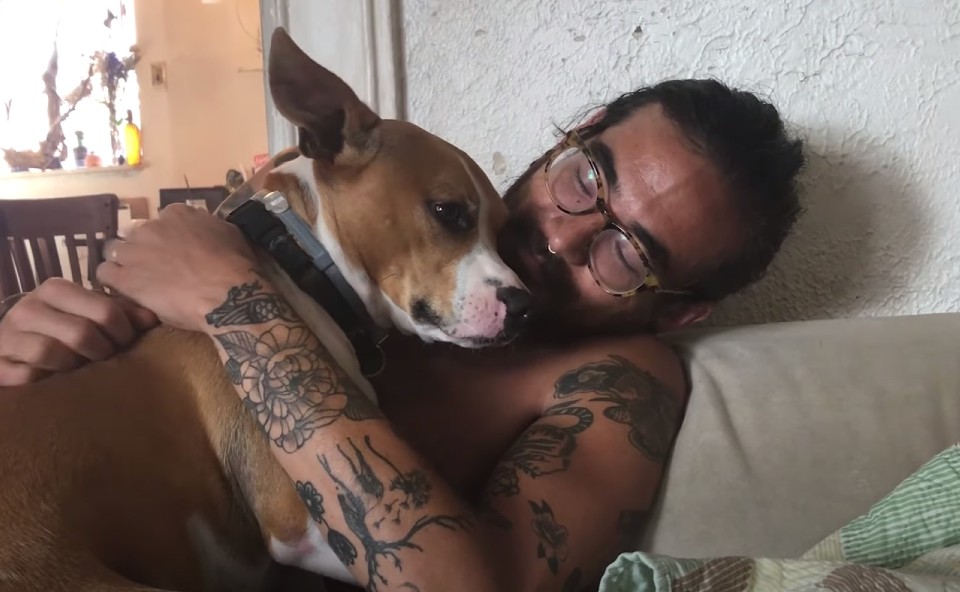 DOGFIGHT: NYC man picks jail rather than give dog back to boss

A former New York pest exterminator is facing a criminal charge after he refused to give back his bedbug-finding work dog, NY1 reports.

Barry Myrick, 37, worked for four years with Roxy, a pit bull mix, before being laid off in March amid the COVID-19 pandemic.

Myrick’s former employer, M&M Environmental, had provided him with the dog and paid for her training, veterinary bills and food, while the dog lived with Myrick and his wife.

“She’s my best friend,” Myrick told the New York Post. “I committed to her long ago, and nothing’s going to come between me and her.”

Myrick even tattooed an image of Roxy on a leg.

“She’s a part of our family. This is the closest to kids we’ll have,” Myrick told the New York Post , which reported that the couple does not intend to raise children.

When Myrick decided to be laid off rather than work as a COVID-19 cleaner without Roxy by his side, he gave back company equipment, but not the dog. Myrick alleges that a company manager told him, “You’re going to keep Roxy, right?”

But M&M later wrote to Myrick demanding that Roxy be returned, calling her “company property.” Myrick refused and M&M reported the dog stolen, prompting prosecutors to charge him with grand larceny.

Myrick later surrendered himself to police in August.

“I spent 15 hours in jail. I wouldn’t wish that on my worst enemy,” Myrick told the Post. “The stories I heard were unreal — someone beat their stepdad with a baseball bat. I couldn’t tell anyone I was there for a puppy.”

Myrick acknowledged signing an agreement in 2016 that said he would need to return Roxy if his employment ended with the company. However, Myrick claims M&M forfeited its claim to the dog when he was laid off and the company did not request the dog be returned.

“When they left the dog with him in March, [the company] made no arrangement . . . to get the dog or pay for the dog in the interim,” William Kurtz, Myrick’s lawyer, told the Post.

A judge is allowing Myrick to keep the dog for the time being until the case is resolved.

Port also alleged that Myrick might want to keep Roxy so he can start a competing pest-control business.

“That’s the last thing I’m thinking about,” Myrick told the New York Post. “My only concern is to not be separated from her. I’m not starting a competing business in a pandemic with no money.”

Myrick contends that Roxy’s previous owner did not care for her properly and that she has not bonded with any other trainers.

“She’s not a golden retriever who will be happy-go-lucky with just anyone,” Myrick told the newspaper. “She has eyes for no one else.”

Those close to Myrick have urged him to give the dog up, but he told the Post that isn’t happening.

“My family said, ‘Give the dog back, you’ll get another one,’ ” Myrick told the newspaper. “But I’ve emptied out my bank account, spent time in jail. What else can they throw at me? I’ll fight this to the end.”

Myrick and his friends have launched social media campaigns to raise awareness about the dispute, including a Change.org petition and a GoFundMe account, according to NY1. They also created a YouTube video showing Roxy’s role in Myrick’s family.