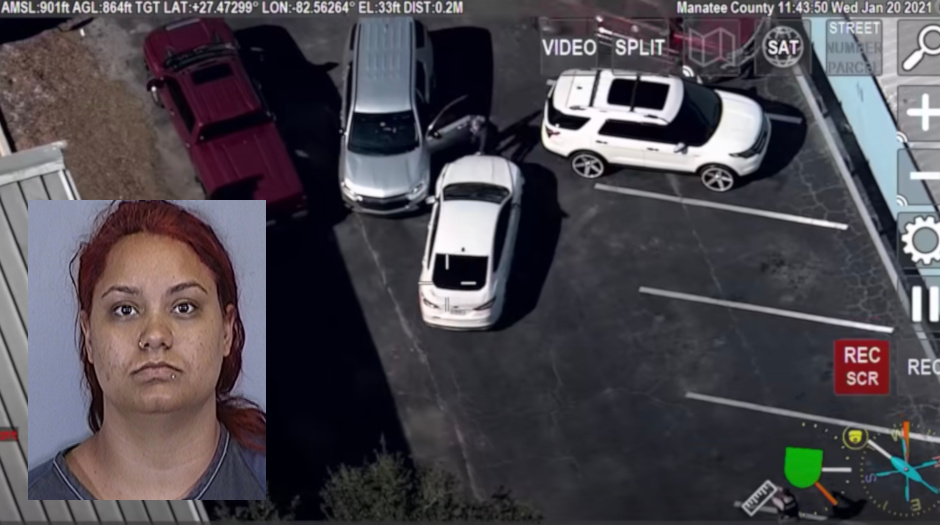 A 23-year-old Florida woman slammed into a sheriff’s deputy in a stolen car this week, sending her sailing onto the hood of the car and tossing her onto the pavement when the car hit another deputy’s vehicle, ABC Action News reports.

Katarina Van Fossen has been charged with attempted murder of a police officer, leaving the scene of an accident, motor vehicle theft, and fleeing police at a high rate of speed, along with several probation violations and contempt charges.

The deputy, who has not been named, is in good condition, the Manatee County Sheriff’s Office said.

The sheriff’s office told ABC Action News that the incident began on Wednesday when Van Fossen, in the stolen white Ford Taurus, fled from deputies after a traffic accident. The county Aviation Unit spotted the car again later in the day in a parking lot and dispatched deputies, who moved to block Van Fossen in the lot. Van Fossen tried to drive away, but the deputy parked her unmarked vehicle in front of the Taurus. When Van Fossen backed up, the deputy got out of her vehicle and shouted commands, but Van Fossen accelerated and hit the deputy.

The deputy rolled onto the hood and windshield of the stolen car as Van Fossen continued to try to escape past the deputy’s vehicle, but she hit another patrol vehicle instead. The sudden stop sent the deputy flying off the car. She stood up on her own, clearly hurt, and was quickly helped from the scene by another deputy.

“She needs to be put in prison, and I will do everything in my power to make sure those charges are not reduced, that there’s no plea bargain,” Manatee County Sheriff Rick Wells said. “She needs to do the time because my deputy is lucky to be alive and I’m aggravated and I’m angry about it.”