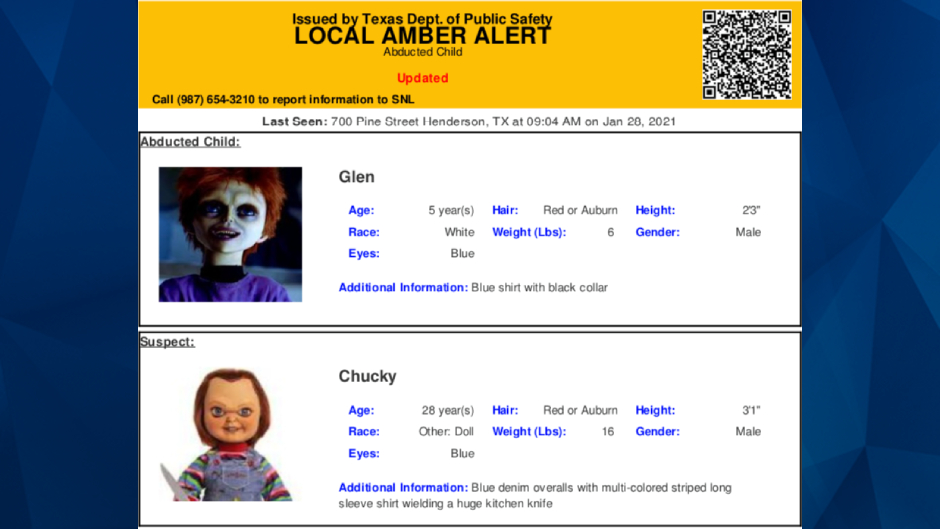 Texas officials have apologized for mistakenly issuing an AMBER Alert on Friday that featured Chucky from the horror series “Child’s Play.”

According to KPRC, the alert stated that a child named Glen — from “Seed of Chucky,” the franchise’s fifth installment — was abducted in Henderson. Chucky was listed as the child’s suspected abductor.

The AMBER alert included pictures of Chucky and Glen. The flier described Chucky as wearing “blue denim overalls with multi-colored striped long sleeve shirt” and “wielding a huge kitchen knife.” His race was listed as “Other: Doll.”

The phone number included in the alert was non-operational, KPRC reported.

The AMBER alert was sent out three times via email to people subscribed to the Texas Alerts System, according to WVLT.

The Texas Department of Public Safety, the agency that issues AMBER Alerts, confirmed to KPRC that Friday’s alerts were sent in error.

“This was actually a test we were running on a dev server and it accidentally went out,” Ruben Medina of DPS explained. “We appreciate you reaching out to us to verify this. We do apologize for this inconvenience (to) you.”