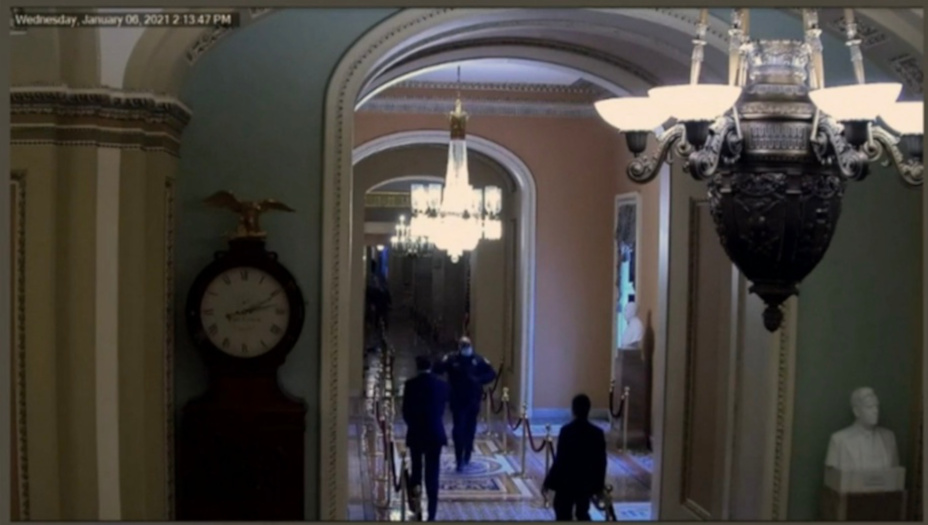 Minutes later, Goodman faced dozens of rioters alone — as they demanded to know where the senators were meeting — and heroically leading them away from the Senate chambers.

“I was very fortunate indeed that Officer Goodman was there to get me in the right direction,” Romney, R-Utah, said after he viewed the video during the second day of Donald Trump’s second impeachment trial. Romney said he’d not seen the footage before and did not know just how close he came to the mob. Romney recalled the police officer who turned him around, but said he was unaware that it was Goodman.

Stacey Plaskett, the non-voting delegate from the Virgin Island,s showed the footage, which saw Romney in the Ohio Clock Corridor just outside the Senate Chambers, walking toward the area where the mob had broken into the building. Plaskett recalls footage already seen of Goodman leading the mob away and notes there was “more to his heroic story.”

“In this security footage, you can see Officer Goodman running to respond to the initial breach,” she said.

Goodman runs by, turning Romney around back toward the chamber. Minutes later, Goodman faced the angry insurrectionists. Previous video seen of Goodman’s actions was recorded mostly from behind him by a reporter. But Plasket played video shot by the insurrectionists, showing the police officer alone as the mob pushed toward him. He led them up the stairs and away from the Senate chamber, giving other officers time to evacuate the remaining senators.

Speaking after the video, Rep Eric Swalwell told the senators that the mob was massing just “58 steps away” when they were evacuated at 2:30 p.m. Fifteen minutes later, he said, the insurrectionists were inside the Senate gallery.

[Featured image: Screenshot: Romney, on left, as Goodman, center, runs toward him]